Manitou Gold Inc. is pleased to announce its upcoming drilling program and additional planned exploration work for the upcoming field season at its 100% owned properties along the Goudreau-Localsh deformation zone (the “GLDZ”), located north of Wawa, Ontario. 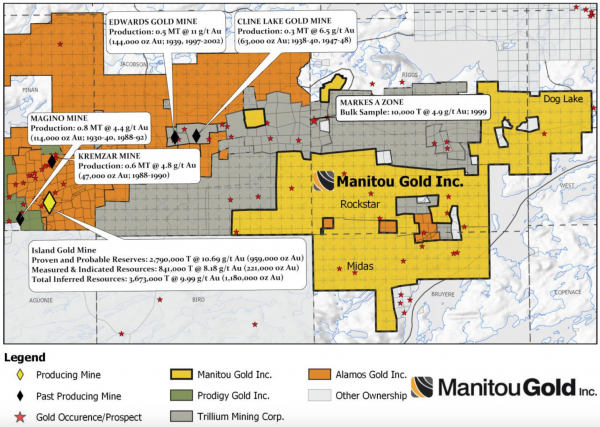 Manitou Gold’s portfolio of properties located along the GLDZ includes the Goudreau Patents, consisting of 160 acres of mining and rights, as well as an additional 16,000 acres of contiguous mining lands comprised of the RockStar, Midas and Dog Lake properties. These properties cover a strike length in excess of 17 km along the Goudreau-Lochalsh deformation zone (GLDZ), which is located within the Michipicoten Greenstone belt.

The GLDZ has seen significant new investments in gold exploration and development activity in recent years. The western half of the GLDZ is owned and dominated by Alamos Gold Inc.’s Island Gold Mine property, which was acquired by Alamos through its friendly takeover of Richmont Mines in late 2017.

Initial drill targets outlined on the RockStar Property
The 2018 field season was quite successful, as the Company was able to expose, and extend along surface, several of the known gold systems in the area; extending the RockStar vein by 150 m and expanding all four vein systems at the Tracanelli Occurrence. In addition, Manitou discovered the Bankfield shear zone (press release of January 8, 2019).

Following these initial successes, Manitou Gold, through its new partnership with GoldSpot Discoveries (see Company press release dated March 1, 2019), has directed GoldSpot to implement their artificial intelligence and machine learning techniques and solutions over all of the current and historic regional data, in order to extract the most promising targets across the Goudreau area properties. GoldSpot’s initial work has identified two particularly attractive targets during their preliminary analysis.

Manitou, in tandem with GoldSpot’s team, plans on reviewing the identified target areas in preparation for the drilling of the initial four key areas of interest. In addition to this drilling work, Manitou Gold geologists will resume washing and sampling of the untested areas of the RockStar vein extension and the Bankfield shear zone, which were stripped last fall, just prior to the arrival of winter conditions, but were never channel sampled. It is anticipated that all of this work, including the drilling, will commence in late spring and extend into early summer. In conjunction with this work, Manitou plans on commencing initial mapping and prospecting of the Midas and Dog Lake properties, which cover highly prospective lands on trend from known gold bearing structures and veins.

Manitou also wishes to announce that it will be putting forward Mr. Dan McCormack, P.Geo as a management nominee for the position of new Director at the Company’s June 20th annual general meeting. Mr. McCormack has been fully engaged in mineral exploration and mining for over the past 30 years in various capacities, including serving as an officer and director of a number of companies. Mr. McCormack, was a director and Vice President of Vault Minerals Inc., a publicly traded Company that assembled and explored key land packages in the prolific Kirkland Lake gold camp. Vault was acquired in 2010 by Queenston Mining Inc., which in turn was acquired by Osisko Mining Ltd. in 2013, with the land package subsequently being transferred to Canadian Malartic, a partnership between Agnico Eagle and Yamana Gold, following the acquisition of Osisko by those two companies in 2014. Mr. McCormack remained a consultant to the owners until his semi-retirement in 2018.

Between 2014 and 2017, Mr. McCormack held positions with Canadian Malartic Corporation as Project Manager (Kirkland Lake) and later as General Superintendent Exploration (Kirkland Lake and Malartic) during which the company added 2.9M of additional gold ounces in the M&I and inferred categories from four projects in Ontario and Quebec.

Prior to joining Vault, Mr. McCormack was President of Kirnova Corp., a company that administered the exploration program and corporate affairs of the Young Davidson’s Matachewan Gold Project. Young- Davidson Mines Ltd. was eventually acquired by Northgate Minerals Corp. and its historic namesake property is now a producing mine operated by Alamos Gold Inc.

From 1984 to 1993, Mr. McCormack maintained positions as a mine exploration and production geologist and was involved in advanced exploration and open pit and underground developments at the Mirado, Cheminis, Barber Larder and Kerr Mines.
“I look forward to the anticipated appointment of Dan to our Board of Directors. Dan is a seasoned industry veteran and I look forward to his contributions and guidance for Manitou Gold” stated Richard Murphy, CEO of Manitou Gold. “As we ramp up for the upcoming drill program, I am very encouraged with the initial drill targets generated by both GoldSpot and our prospecting crews. In addition to testing these first targets, I anticipate that our prospecting efforts through this field season will result in additional targets being identified and tested.” 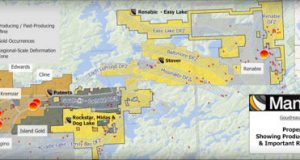 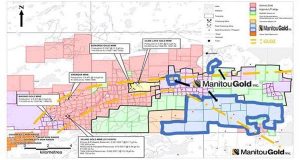