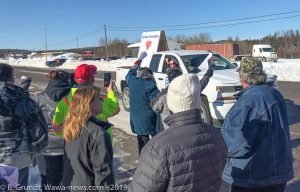 The United We Roll Convoy stopped in White River and then Wawa, Sunday afternoon. Originally scheduled to pass by on Saturday, organizers called a rest stop in Thunder Bay. The outpouring of support from Northern Ontario was incredible, catching everyone off guard and delaying them as they tried to stop where they could, and always, always slowed down to toot horns and wave at all the little groups of people in their driveways.

From Wawa, Ann-Celine McKinnon, Garry and myself went up to meet the convoy in White River. In one of those things that Wawaites know only too well – there seems to be a ‘Wawa Connection’ to everything. On the media bus, Steve is a friend of Ann-Celine’s. She arranged for me to get a ride in one of the trucks in order to do an interview. My luck held out, and I had a ride to Wawa. My driver, Kevin Peters was the driver of the Control Vehicle. He was, what is commonly known to motorcyclists as the Ride Captain. He spends his time driving and talking to all the other vehicles making sure that everyone is in line, rolling, and most importantly safe.

Within the convoy there is a vehicle ahead monitoring road conditions, Kevin as Control, 4-5 spread through the convoy, and a tail. Everyone is in constant communication, making sure that everything rolls smoothly. At stops, he ensures that everyone is off the road safely, and then co-ordinates the convoy going back on the highway. This is a complex job, and requires constant attention. The lead vehicle and the Fire Truck co-ordinate navigation and routing with their navigation co-pilots. Fuel, food, and meet & greets all require coordination for the 40+ vehicles and accompanying people. In our drive, my questions about the trip were interrupted with comments from “Rover” about upcoming potholes, bumpy roads, slush; and questions from other vehicles as required.

He also lets the convoy know of people standing alongside the road – “show them some love” was a common phrase; and then all the horns would blare and everyone would wave! It was incredible! Goose bumps every time it happened. Everywhere, Normandy Lodge, Dubreuilville Corner, Belanger Road load check, Catfish Lake Road, Northern Lights Ford, Crack’s and Provost, MTO Yard, Goose Hill, and Pinewood Drive. 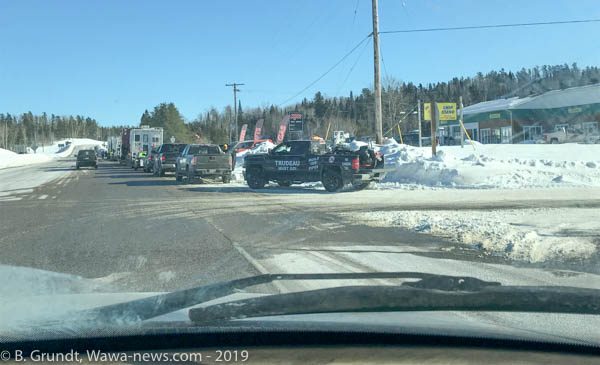 This convoy is politically motivated, that has been made clear from the first. But it is so much more than that. The organization behind this. The people who have given up their time to do the run to Ottawa and back. The drivers along the way who have had their routes changed so that they can join (the combine is one of those). The hope that this will unite Canadians, make that united voice known. People are weary, and looking for stability in their working lives, and not believing that their politicians are really listening to them. Things need to change, pipelines do need to be built with safety a priority for the safe transport of Canadian oil to Canadian markets, the lessening of foreign oil purchase (without carbon taxes) and that their other concerns are given an honest listen. 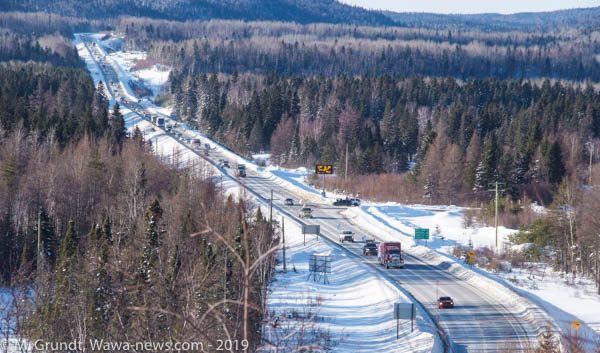 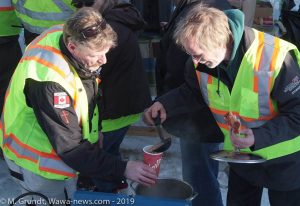 After about half an hour of walking around, signing vests, and the hood of the big fire truck, everyone gathered for the singing of O Canada by Angie (Angela Reid). Pat King (originally from Sault Ste. Marie) called the one and only organizer who couldn’t make the trip, Wawaite Jason Corbeil. 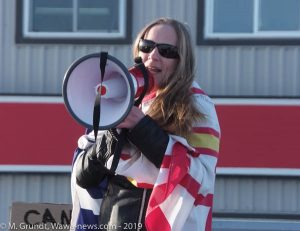 Pat detailed what was happening at the ‘meet & greet’ for Jason. Then Pat held the phone up and asked for everyone to shout out a “Hello” to Jason. Everyone did just that, and Pat was in shock as to the response. Then he gave his phone to Judy Stein, Jason’s neighbour in Wawa, and it sounded like Jason would be making his way back this smmer.

It wasn’t too much longer and the command was again given – “Wheels Up”. The next stop would be Sault Ste. Marie, getting closer and closer to Ottawa. 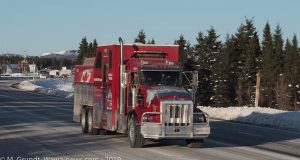 The United We Roll Convoy will be in Wawa today 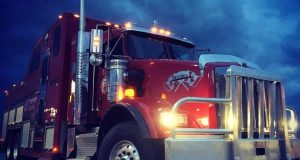 “Come Out to Cheer!” – United We Roll Convoy on Sunday, February 17 – UPDATED with LIVE TRACKER

OPP – United We Roll Truck Convoy may cause delays 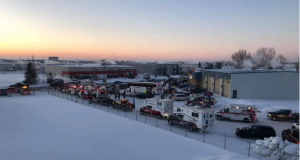 United We Roll! Uniting Canada as they go!