“They should have just highlighted VIA’s intention to scrap Canadian jobs by contracting out a portion of their on-board services to a U.S. firm,” says All Aboard Northern Ontario strategic policy director Greg Gormick. “Instead, the union has highlighted the possible awarding of a VIA contract to the international rail and transit giant, Siemens Mobility, for the production of desperately-needed, high-performance trains for VIA’s Quebec-Windsor Corridor. Big mistake.”

Unifor National Council 4000 has chosen to slam the possible Siemens order without the slightest idea of what it would entail. Of the four bidders for this $1.5-billion contract, Siemens is the only one with a proven product now in revenue service in the U.S. These innovative, North Americanized trains are derived from the Siemens Railjets that zoom across Austria, the Czech Republic, Italy, Germany, Hungary and other European countries every day and night.

Says Gormick, “The Siemens bid is for 200-kph Charger high-performance diesel-electric locomotives and complementary Viaggio rolling stock. This is exactly what VIA requires if it is going to survive and thrive. But the union has already decided this proven design should be rejected in favour of homegrown equipment from other bidders, none of which have suitable designs ready to go. This is sheer madness. Raising this uninformed argument will only detract from what should be a focus on publicly-funded VIA’s intention to contract-out Canadian jobs.”

In a June 2018 report for Oxford County, Gormick explained the ability of the Siemens trains to quickly deliver fast, cost-effective and reliable VIA service. The SouthwestLynx: Integrated High-Performance Transportation for Southwestern Ontario, report is available at:

“We endorse Greg’s views fully on this issue,” says All Aboard Northern Ontario founder and team leader Eric Boutilier. “His equipment knowledge and vision are just two of the many reasons we asked him to join our team. Even Unifor tried to use Greg through us, asking him to provide information, but without offering any assistance to our campaign. He declined.”

Says Gormick, “Unifor is not helping to quash the disgraceful contracting-out of Canadian jobs at VIA by slagging an excellent equipment choice. When I questioned them, they admitted they don’t know how Siemens would execute this contract. I can easily surmise how that would go because I have done consulting work for Siemens in the past, as well as for Bombardier, GM’s Electro-Motive Division in London and the Czech Republic’s Skoda on their excellent TTC streetcar bid, which was foolishly rejected by Toronto politicians.

“There could easily be as much or more Canadian content in the Siemens trainsets than the 25 per cent Bombardier included in their behind-schedule TTC streetcars, which are largely Mexican. The trains Siemens continues to deliver in the U.S. draw on suppliers from all across the country, with these sub-systems combined into the final product at their high-tech Sacramento production facility.”

All Aboard Northern Ontario remains open to working with rail labour to wisely advance the cause of improved rail passenger service. But ham-handed initiatives like the one Unifor will unfurl at major VIA stations across the country on Wednesday make that difficult.

Says Boutilier, “Let’s see what comes of the uninformed material Unifor will hand out at tomorrow’s protests, which we don’t think will aid the cause of better rail service at all. We are extremely disappointed and frustrated by all of this game playing. We only hope it doesn’t damage the Siemens Canada bid for this urgently-needed equipment, which can save what’s left of our deteriorating VIA service.”

In 2019, All Aboard Northern Ontario will release its Northeast Lynx plan for the restoration of the provincially-operated Toronto-North Bay-Cochrane passenger trains, which the Liberal government cancelled in 2012. It, too, is a high-performance rail solution, making use of existing and robust stainless steel equipment, which would be rebuilt by the highly-skilled Unifor workers at the Ontario Northland Railway’s North Bay Shops. 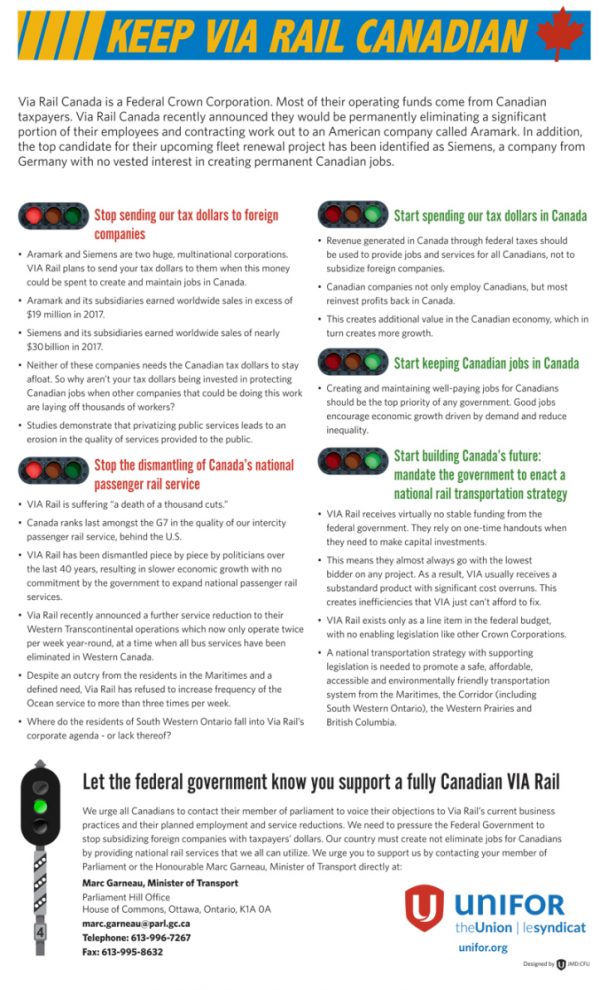 Letter – Time to Keep the Promise for Passenger Rail