During question period on Monday, Mushkegowuk – James Bay NDP MPP Guy Bourgouin called on the Ford government to stop ignoring the needs of Northern families and invest in passenger transportation for Northern Ontario.

Bourgouin said that disjointed bus services force some Northern families to travel for days to get to cities within only a few hours’ drive.

“For one of my constituents, recent changes to bus routes means a 26-hour bus trip to get from Barrie to Kapuskasing,” said Bourgouin.  “It now takes two days for those travelling from Sudbury – which  only takes a six hour drive  – because of a lack of coordination with transfers.”

While Northern families are left struggling with fragmented bus services, the Ford government is making things even worse by refusing to restore Northlander passenger rail services, shuttered by the previous Liberal government.

“Whether it’s due to poorly maintained roads or limited or no access to public transportation, communities across the North are struggling. This is not new. First the train to Cochrane was cut. Next came cuts to Greyhound,” said Bourgouin.

“What does this government have to say to my constituents who have settled for second-class bus service for far too long?” 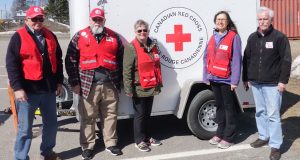 Greyhound – Any Responsibility for Stranded Passengers?