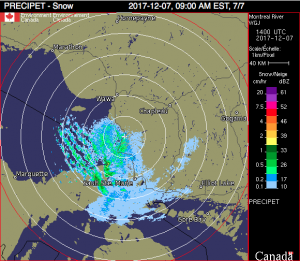 Local snowfall amounts near 15 cm are possible in the heaviest snow squalls.

The snow squalls will shift south of the region by late Friday morning.

Snow squalls cause weather conditions to vary considerably; changes from clear skies to heavy snow within just a few kilometres are common. Travel may be hazardous due to sudden changes in the weather. Visibility may be suddenly reduced at times in heavy snow.

Snow squall watches are issued when conditions are favourable for the formation of bands of snow that could produce intense accumulating snow or near zero visibilities.