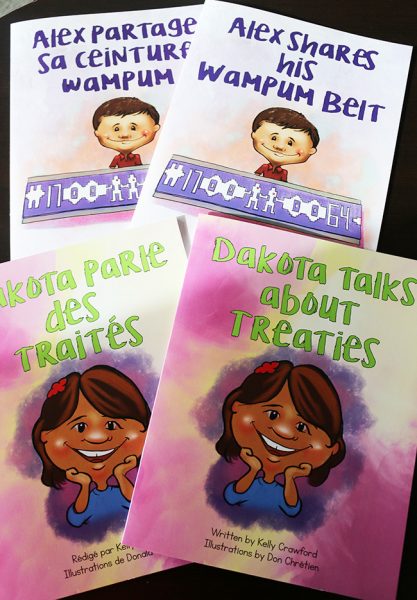 The books – Alex Shares his Wampum Belt and Dakota Talks about Treaties are a complement to the already popular “We are all Treaty People” teachers kit that is being used by over 2000 English schools and 1000 French schools all across the province.

“These new books are great resources for elementary teachers to use in their classrooms,” said Anishinabek Nation Grand Council Chief Madahbee. “It will help students at a younger age learn about the treaty relationship.  Teachers will be getting out the message that treaties are the legally binding and sacred agreements that set out the rights, responsibilities and relationships of First Nations and federal and provincial governments.”

Honourable Education Minister Mitzie Hunter says that these books will be wonderful additions to classrooms across the province.

“Books like these help to enrich all students’ understanding of the histories, cultures, contributions and perspectives of Indigenous peoples in Canada,” says Minister Hunter.

Author/educator Kelly Crawford of M’Chigeeng First Nation and artist Donald Chretien of Nipissing First Nation collaborated on the project.  The books are also available in French and can be ordered through the Anishinabek Nation head office by emailing [email protected]