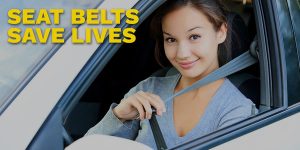 The Ontario Provincial Police (OPP) will be conducting their Fall Seat belt Campaign from September 27 until October 6, 2017.

Seat belt law enforcement and education is one of the OPP’s traffic safety priorities; the OPP conducts provincial seat belt campaigns every year to raise awareness of seat belt use and their effectiveness in saving lives in the event of a collision.

The OPP will be out on patrol and conducting seat belt spot checks during the campaign. ” Buckling up is your responsibility ,It only takes a few seconds and when it’s worn properly your seat belt greatly increases your chances of surviving a motor vehicle collision”, says Sudbury OPP Detachment Commander, Staff Sergeant Dan Esposto.

A driver can be charged and face a fine totalling $240 and two demerit points for seat belt infractions. Demerit points remain on a driving record for two years from the date of the offence.

Last year (2016), 45 people died in collisions on OPP-patrolled roads in which the deceased was not wearing a seat belt.