May 16, 2017 @ 12:29
Today during question period, Ontario NDP Leader Andrea Horwath demanded to know why the Wynne Liberals are ramming through their $40 billion hydro borrowing scheme when they know it will threaten jobs in Sault Ste. Marie and across the province.

Horwath told the legislature about Steve and Lucy Fronzi, business owners in the Sault who employ over 50 people in their community. They already pay over $10,000 every month for hydro, and if their bills go up any further, they may have to cut back on staff.

“Kathleen Wynne’s borrowing scheme will cause hydro bills for people and businesses to soar,” said Horwath. “Why is the premier forcing good, community-minded employers like Steve and Lucy to choose between providing jobs in the Sault or keeping up with ever-rising hydro bills?”

Confidential cabinet documents leaked by a whistleblower last week confirm what people already guessed about the Liberal hydro scheme – Wynne is borrowing billions to get herself and her Liberal party through the next election and hydro bills will skyrocket after that. That shows her priorities: votes for herself, not affordability for families.

“Steve and Lucy pride themselves on being able to offer good jobs to Sault residents, they were promised relief, but now they are reeling from the truth – that the Liberal hydro plan is a borrowing scheme designed to get the premier re-elected at the expense of hard-working Ontario families,” said Horwath. “It’s a disgusting betrayal of the public trust.”

Horwath announced this week that her party will not be supporting the borrowing scheme, saying that New Democrats will not vote for higher hydro bills.

The Ontario NDP’s plan to reduce hydro rates by up to 30 per cent will include the end of unfair rural and northern delivery charges, it will end time of use fees that punish families for cooking dinner at dinner time, and will bring Hydro One back into public hands.

“Under the NDP plan, Steve and Lucy and business owners across the province will not have to choose between their employees and paying their bills,” said Horwath. “That’s a choice no employer should be forced to make.” 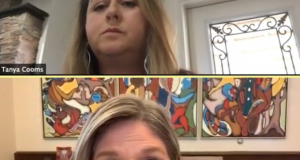