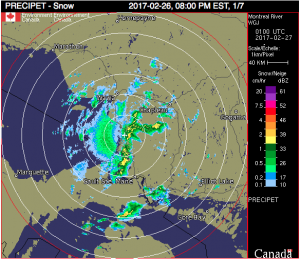 An Alberta Clipper type of disturbance has brought a general snowfall to the areas near Eastern Lake Superior as expected. Total snowfall amounts of 5 to 10 centimetres are likely in most areas by the time the snow tapers off to scattered flurries later tonight.

However, total snowfall amounts of 10 to 15 cm are likely in a couple of localities, such as Wawa by midnight.

Motorists should allow extra time to reach their destination tonight as untreated roads will be snow covered and possibly slippery. Visibility may also be reduced at times to a few hundred metres in brief bursts of heavier snow.

Please continue to monitor alerts and forecasts issued by Environment Canada. To report severe weather, send an email to [email protected] or tweet reports to #ONStorm. 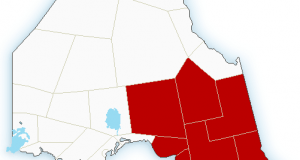 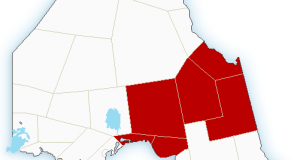