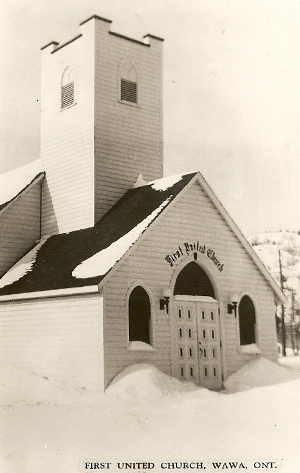 After eight days at sea, traveling from Germany to Canada, our ship the “Beaverbrae” docked in Quebec City on October 29, 1948 – my birthday. My mother Ida, sister Inga and I were taken to a railway station where we boarded a train heading West. We were on our way to Thunder Bay (Port Arthur) where we would spend two months with relatives. My mother and stepfather were married there and furniture was purchased, as well as warm clothing, prior to traveling to Wawa which was to become our new hometown and has remained mine for more than fifty years now.

The train left Port Arthur in the afternoon and we arrived in Wawa the following morning. The date was January 16th, 1949 and I was eleven years old. The train ride was long, through miles and miles of wilderness interspersed occasionally by tiny communities. I thought we would never arrive. When we finally did, the first thing that struck me was how white everything was. Snow everywhere, lots of it. It was unbelievable. There was a tiny station, a freight shed and the Sinter Plant, that was it.

A taxi, I believe it was owned by Mr. Eli O’Bradovich or Mr. Kiverago, drove us to our “house” at 60 Station Road. There sat a log shack with no running water, no indoor bathroom, no furniture except for an old kitchen table with four chairs and a couple of homemade bunk beds. It must have been a terrible shock for my mother because she cried for a long time. For Inga and myself, it was the beginning of an adventure.

There was an iron cooking stove in the kitchen which also provided heat. It burned wood and later “presto logs”. There was a container attached to one side which heated water. Until spring arrived, when the water lines to our house were brought in, we carried water in buckets from a well behind Mr. Charlie Ward’s house, across the street from us.

It wasn’t too long before the house became a home. The furniture arrived by train from Thunder Bay. My mother painted and papered, new flooring was laid, and curtains were sewn and hung. We even became accustomed to the outhouse although it was cold. Food was plentiful. I had never seen such abundance in my eleven years of life. Flour and sugar by the hundred pound, oranges by the crate, it was like a dream. A space heater was installed in the living room and we were warm, cozy and well fed.

Among the first people I met were the Martins. They had three daughters a bit older than myself, named Marie (Symanyk), Ruby and June. They lived on McKinley Street approximately behind the Embassy Restaurant. I also met the Melvilles who lived on Station Road on the way to the station. They gave me a beautiful black kitten, the first pet I ever had.

Mr. and Mrs. Al and Mabel Irvine lived directly across the street from us. They taught me how to play cribbage and Mrs. Irvine gave me seeds from her Tiger Lilies which I planted along one side of the house and they grew there for many years. Mr. and Mrs. David (Dyke) and Linda McLay were our neighbours on one side. Their daughter Lois became my very first friend in Wawa. We spent many happy hours playing marbles, skipping rope and playing house with our dolls. Lois was also very patient with me and my limited knowledge of the English language at that time, and I believe she helped me tremendously. When I think of Mrs. McLay, brownies come to mind as I believe she baked the best ones I have ever tasted.

Two houses down on the other side of our house lived a very kindly gentleman by the name of Mr. Louis Grosjean. Further down on the other side of the street lived Mr. and Mrs. Neil Morrison and family, and Mr. and Mrs. Eric Munro and family. There were also the Boomhowers, the McMillans and the Shaughnessys and I am sure there were others that do not come to mind readily.

When dry goods were needed, such as material, wool, thread, warm socks, work clothes, etc. we bought them at Mrs. Berdusco’s store. Mrs. Eva Kettles also worked there sometimes. Groceries were bought at Frank Haman’s or at White’s. These stores were much smaller then. A while later Mr. Ken Richardson also had a grocery store about where Mariette’s is presently. Two or three times a week, when the train came to Wawa, people gathered (usually in the evening) and waited in line to pick up their mail at the post office located in the front part of the house that stood about where the Toy Library is located on Broadway Avenue. I always associate the names Penno and Lethbridge with the post office.

We did not have sidewalks and the streets that existed, including Broadway, were not paved. There was no hospital but there was a small medical centre which was later converted to a nurse’s residence when the hospital was first built. There was no highway, no airport, and of course no television, but there was radio and there was Keith Messenger and his Cessna which used to land on Wawa Lake to fly people to Sault Ste. Marie. The United Church was located where the Pentecostal Church is now (Editor’s Note: corner of Algoma Street and Government Road – across from the Lady Dunn Health Centre).

The bush began just behind our backyard and far beyond as Churchill and Beck Avenues did not exist. We played hide and seek there and picked blueberries and pincherries. There was a baseball field where the seniors’ residence is now. Wawa had some very good and competitive baseball teams then and the games were always an event, and well attended. July 1st and Labour Days were looked forward to with much anticipation. They were always an all-day event with lots of races and games. The McLays had a small concession and they sold wonderful homemade French fries, hot dogs, soft drink and other tempting goodies.

Summer seemed longer and warmer and I spent many happy hours at the Lions Beach with my friends often in June already. Mr. Fritz Herzberg was often there to teach those that wanted to learn how to swim. Winter seemed shorter and colder with more snow and definitely more storms which I loved and still do to this day. Evenings we skated at the outdoor arena (providing there was no hockey game) hoping it would not snow and if it did, that there would be enough boys to clean off the ice with snow scrapers.

Not many people bothered to lock their doors. Christmas was wonderful and exciting. People visited back and forth entertaining and being entertained. I can remember a note on our door which read “be back soon, help yourselves”.

School was in the old two-room town hall. Mr. George Ross and Mr. Wesley Ross (not related) taught multiple grades in these two rooms. We also had an annex and Ms. Anna Grexton taught the lower grades in this small one-room building. We did not have a gymnasium or laboratory, for that matter we did not even have a proper schoolyard, but the teachers surely turned out some excellent students who went on to bigger and better things.

I met my husband Henry Hechler in Wawa and we married in November of 1958. We raised three children here, two girls and a boy. Our oldest daughter Kelly and son Jim are working and raising their families in Toronto. They both look back on their growing up years in Wawa with much pleasure and look forward to their visits each Summer. Our youngest daughter Christina remains in Wawa for which we are grateful.

Wawa has been good to us, a wonderful community to raise our children and a great place to retire. 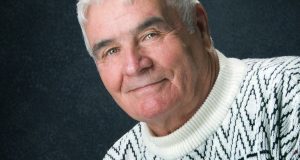 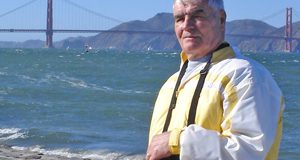