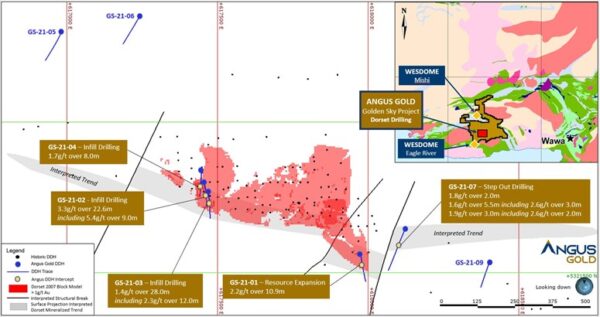 Angus Gold Inc. is pleased to announce the first set of assay results from its ongoing drill program at the Golden Sky Project in Wawa, Ontario. Results from twelve (12) holes totalling 2,295 metres from the 20,000-metre drilling program were successful in confirming high-grade mineralization and have shown the potential for the expansion on the Dorset Deformation Zone. Holes GS21-01 to -04 intersected thick intervals of gold mineralization and returned some of the best grades to date, including a high-grade interval of 5.4 g/t over 9.0 metres in hole GS21-02. Mineralization shows potential to support both high-grade open pit and underground mining. The drill program was also successful in extending the Dorset Zone 100 metres to the East in step-out hole GS21-07, which returned up to 1.6 g/t over 5.5 metres.

Results from an additional four (4) drill holes, totalling 908 metres, drilled on new gold targets within the Banded Iron Formation (“BIF”) Zone are still pending from the Fall 2021 drilling program. An additional 23 exploration targets remain to be drill tested within the current geophysical grid on the Dorset Deformation Zone. Further induced polarization (“IP”) surveys are also planned for early 2022 to expand coverage across the entire strike length of the Dorset Trend. Drilling is expected to re-start immediately following the completion of the IP survey.

Steve Burleton, Chief Executive Officer of Angus, states: “These results from the Company’s first drilling program on the Golden Sky Project are highly encouraging and show potential for the Dorset Zone to host significant open pit and underground gold resources. One of our main goals was to test for high-grade gold structures similar to those seen at Eagle River and hole GS-21-02 was successful in returning the thickest and highest-grade gold intersection drilled on the Dorset Zone to date. Our next phase of drilling will follow up on these results to better define the orientation of the potential high-grade structures and continue expanding the limits of the gold mineralization. Golden Sky has returned some very impressive results from Dorset and we are looking forward to advancing our exploration programs on Dorset Deformation Zone, the BIF Zone and the numerous targets that have been identified in our regional geochemical programs. 2022 is shaping up to be a very active year for Angus.”

The ongoing 20,000-metre drill program focuses on two target areas within the property: the Dorset Deformation Zone, which hosts a historical gold resource and the BIF Zone, a large area of banded iron formation that has historically returned high-grade gold assays in surface sampling. Regional exploration programs have also been running concurrently with the drilling and are identifying numerous areas for detailed follow-up in 2022.

The first phase of drilling was designed to test for higher grade mineralized structures within the Dorset gold resource, extensions of the gold system to the east and new targets surrounding the Dorset trend. The first four holes were planned within the existing Dorset resource to test for higher-grade gold zones and structure. GS21-01 intersected significant gold mineralization at the eastern end of the Dorset Zone and provided valuable information on the structure of the shear zone in this area. Holes GS21-02 to -04 tested the Dorset Zone at its western extent in an area of historic high-grade surface samples and were successful in identifying thick zones of higher-grade mineralization to a depth of approximately 80 metres. Holes GS21-05, -06, -08, -09 and -10 tested a selection of new geophysical targets to the north and south of the Dorset Zone with no significant results. Hole GS21-07 was a 100-metre step-out hole to the east, along strike, of the Dorset Zone, and was successful in intersecting significant gold mineralization within the Dorset Shear. Holes GS21 -11 and -12 were drilled to test new targets associated with a felsic intrusive to the northeast of the Dorset Zone. Anomalous gold was identified in Hole 12 and warrants further investigation.

The 100%-owned Golden Sky Project is located within the Mishibishu Lake Greenstone Belt of Northern Ontario, which is host to the high-grade Eagle River and the Mishi open-pit gold mines of Wesdome Gold Mines Ltd. (“Wesdome”). The Company’s 234-square-kilometres land package is located approximately 50 kilometres west of the town of Wawa and is situated immediately between the two Wesdome mines. The project is host to the near-surface Dorset Gold Zone, which contains a historic estimated resource (using a 0.50 g/t Au cut-off) consisting of an indicated resource of 40,000 ounces of gold (780,000 tonnes grading 1.4 g/t Au), and an inferred resource of 180,000 ounces of gold (4,760,000 tonnes grading 1.2 g/t Au). For greater details on the Golden Sky Project, please refer to the NI 43-101 technical report for the Golden Sky Project entitled, “NI 43-101 Technical Report Wawa Property Ontario, Canada” dated February 18, 2020, and available on the Company’s SEDAR profile.