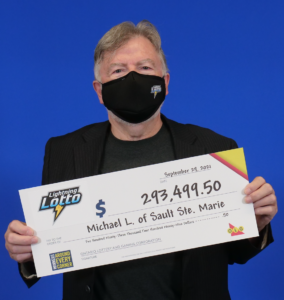 Michael, who is retired from the construction industry, is a regular lottery player who has been playing the same numbers on games such as LOTTO 6/49 for over 30 years. However, this time, he tried LIGHTNING LOTTO, which can only be played by Quick Pick. “I had asked for LIGHTNING LOTTO, when all of sudden the ‘BIG WINNER’ screen popped up. I didn’t know how much I won right away but when I saw how much the jackpot was, I went from shock to elation and back to shock!”

While at the OLG Prize Centre to collect his prize, the 74-year-old married father described the surprise celebration he had with his wife. “I bought some local smoked whitefish and a bottle of bubbly on my way home and when I got in, I told my wife, ‘We didn’t win LOTTO 6/49 but we did win this!’ showing her the LIGHTNING LOTTO ticket. She was surprised and overjoyed!”

Michael has plans for his windfall, like buying a new car and saving some money for a trip to Canada’s East Coast when it’s safer to travel. But a new idea for a purchase came after spending a night at a Toronto hotel. “We decided to buy a new mattress after having a wonderful night’s sleep at the hotel!”

LIGHTNING LOTTO players can win a jackpot on the spot! Match all five numbers in any one line on your LIGHTNING LOTTO ticket with those drawn earlier that day to win the jackpot. The top prize starts at $125,000 and grows with ticket sales. Each $2 Quick Pick consists of three lines of five numbers from 1 to 49. LIGHTNING LOTTO is available exclusively at lottery retailers. Odds of winning any prize are 1 in 4.47. For more information on How to Play as well as full prize details and odds of winning, visit OLG.ca.

The winning ticket was purchased at R & B Lottery on Queen St. in Sault Ste. Marie.