High levels of air pollution due to smoke from ongoing forest fires.

Smoke plumes from active fires in northwestern Ontario and eastern Manitoba will affect the area resulting in deteriorated air quality across much of northern Ontario.

Conditions are expected to improve tonight or Tuesday morning as winds shift to a more northerly direction with the passage of a cold front.

If you or those in your care are exposed to wildfire smoke, consider taking extra precautions to reduce your exposure. Wildfire smoke is a constantly changing mixture of particles and gases which includes many chemicals that can be harmful to your health.

There are three active casee of COVID-19 in the Algoma District today (Sault Ste. Marie and Area).

There were no new fires discovered in the Northeast region by the afternoon of July 18.
There are thirteen active fires across the region, of these, one is not under control at this time, two are being held, three are under control, and seven are being observed.

The fire hazard ranges from high to extreme in the northern portion of the region with the exception of the far north, which is showing mostly a moderate to high hazard. Other areas in the region are seeing a low to moderate hazard today.

Northwest Forest Fire Region – Five new fires were discovered in the northwest region by the late afternoon of July 18, with more reports yet to be investigated. Last night there were at least three systems of thunderstorms that moved through northwestern Ontario, hopefully not sparking many new fires.

ON511 is warning that along Hwy 105 (north of Ear Falls and Red Lake area), visibility can be reduced due to smoke from nearby forest fires. Please make sure your headlights are on and use caution travelling Hwy 105 northerly to Red Lake. 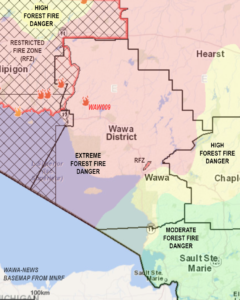 There will be some delays today at the Magpie River Bridge for a Recurring-Engineering Investigation.

Algoma University and Sault College are recommending but not requiring students and staff to get vaccinated against COVID-19 if they are going to be on campus this fall. Currently, Western University is requiring students who will be living in residence to have at least one dose of the COVID vaccine. Students at Western’s affiliated university colleges (Brescia Exterior. Brescia University College · Huron Exterior · Huron University College · King’s Exterior) also have to be immunized. The Toronto Star is reporting that there will be no capacity limits on classes or physical distancing necessary (from a memo obtained by the Star).

It was nice to see the new pavement at the Big Bird Inn and Subway!

Steve Clark, Minister of Municipal Affairs and Housing, will be joined by Stan Cho, MPP for Willowdale, as well as members of the Toronto and Region Conservation Authority and Greenbelt Foundation to make an announcement at 11 a.m.

Lisa Thompson, Minister of Agriculture, Food and Rural Affairs, will be joined by Lisa MacLeod, Minister of Heritage, Sport, Tourism and Culture Industries, and Sam Oosterhoff, MPP for Niagara West, to make an announcement about funding support for Ontario’s agri-food tourism industry at 12 Noon.

Ministers Jill Dunlop, (Colleges and Universities), and David Piccini (Environment, Conservation and Parks), will be making announcements at 12:15 p.m.