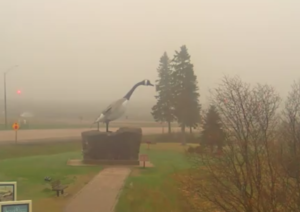 Fog advisory in effect for:

Near zero visibility in fog is expected or occurring. Areas of dense fog will reduce visibility to near zero.

Locations adjacent to Lake Superior, including Highway 17 from Marathon to Thunder Bay may be affected.

Thursday morning. Visibility may improve for some areas Thursday afternoon before deteriorating again by Thursday evening.

Travel is expected to be hazardous due to reduced visibility. If visibility is reduced while driving, slow down, watch for tail lights ahead and be prepared to stop.