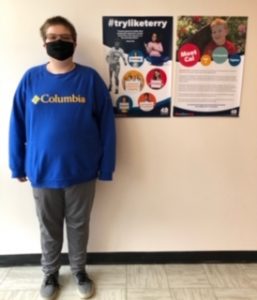 In the pouring rain, on September 30th, Michipicoten High School’s grade 9 students participated in this year’s Terry Fox Run which was the 40th Anniversary of the Marathon of Hope.
Terry Fox, who was diagnosed with cancer and had to have his leg amputated due to the cancer, decided he would run across Canada to raise money for cancer research.
​Ms. Fresque, the teacher who organized the Run, commented, “When our school fundraising package arrived, I flipped through the book inside called Forever Terry and was brought to tears by the words that famous Canadians had written about their encounters or memories of Terry. I knew our class had to do something to raise money for the cause, even if it would look a bit different with Covid regulations. Although we didn’t pick the best day to walk, as it rained heavily, it was nothing compared to some of the severe weather Terry endured daily and the kids didn’t complain once. We managed to raise over $900 and I was impressed with the class efforts, especially from Jacob who single-handedly raised $395.”
Jacob was inspired to raise money for the Terry Fox Foundation because many members of his own family have been affected by cancer. He explained that due to Covid he was unable to go around to people’s homes to raise funds and instead had to rely on online donations.
As another student noted, “We may not be able to run across Canada like Terry Fox set out to do, but we can still raise money.”
So far MHS has raised almost $1000 to help support the Terry Fox Foundation thanks to generous donations by Wawa residents. If you want to help raise money for cancer research you can still donate funds at http://www.terryfox.ca/MichipicotenHSWawa
~ The writing of this article was a group effort by one of MHS’s Grade 10 English classes.