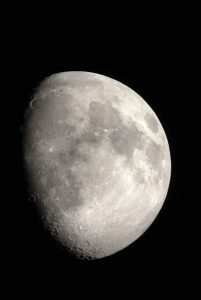 The study of astronomy has been around for some 5,000 years and is regarded as the oldest of the allied sciences. Over time, the constellations were created by seeing shapes using a handful of stars appearing close together such as Ursa Major or the Big Dipper. By connecting these stellar dots, celestial shapes came in the form of a person, animal, object or even a god and were key players in the creation of mythological stories.

The wandering planets are seen with the unaided eye and were followed through the months and years as they ventured across the starry background. In some cases, the night sky was portrayed in drawings on the walls of cave dwellers. Throw in bright meteors (shooting stars) and the occasional display of northern lights, the night sky was the entertainment of all civilizations for thousands of years as well as a mysterious place of superstition such as viewing a total lunar eclipse or witnessing a bright comet.

Once the telescope was invented in 1608, the night sky was now a place to investigate and study and not just look upon in wonder and amazement. As time went on, new theories and observations were made with technology playing an ever-increasing part in just the past few decades.

Saturday, May 2, 2020, marks International Astronomy Day. This is the time of year the astronomical community around the world celebrates by sharing this great field with the public. Displays tables that could include meteorites, star charts, free handouts, etc. are set up as well as a few telescopes at well-visited locations such as museums, shopping malls and bookstores during the day and free public star parties at night. Because of the Corvid-19 pandemic, all social gatherings are suspended but through the power of technology, we can still help bring the wonders of the night and celebrate online.

The Ottawa Centre of the Royal Astronomical Society of Canada will be broadcasting International Astronomy Day virtually via Zoom webinar with live images of the Sun, Moon and Venus through telescopes as well as other presentations. When the sky darkens, you can enjoy live telescopic views of various celestial objects, so let hope for clear skies. Anyone interested in joining must register in advance for this free webinar. A link to Virtual Astronomy Day, as well as a complete schedule of events, is found on my website. Come join us as the night sky is a wonderful classroom.