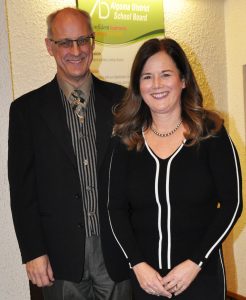 Algoma District School Board held their Inaugural Meeting on December 3rd.  Jennifer Sarlo was acclaimed and will continue in her role as Chair of the Board while Brent Rankin was nominated by Trustee Susan Thayer and elected to the position of Vice Chair.

Chair Jennifer Sarlo – Jennifer Sarlo was first elected as a Trustee for the Algoma District School Board in 2006 serving Ward One in Sault Ste. Marie.  In 2009, Jennifer became Vice Chair of the Board and in December 2011, she was elected as Chair.   She has served as an alternate member of the Ontario Public School Board Association’s (OPSBA’s) Policy Committee.  In her years with the board, Jennifer has also taken an active role in the School Effectiveness Visits and has been on the New Schools Steering Committee.  She has been a member of the Finance and Operations Committee, the Discipline Committee and the External Audit Committee.

Prior to being elected to the Algoma District School Board, Jennifer was the Chair of ADSB’s School Council Coordinating Committee (SCCC) now known as the Parent Involvement Committee (PIC).  She was also the Chair of Grand View Public School’s School Council.  She has always been very supportive and involved in the elementary and high schools her children attended (Grand View, Korah and White Pines).  Jennifer is also an involved and respected member of her community and her church.

Jennifer addressed the board following her acclimation: “I am honored to continue to serve the Algoma District School Board as its Chair. Thank you Trustee Susan Myers for your nomination and thank you fellow Trustees for your confidence and continued support. I look forward to working with Vice Chair Brent Rankin and I want to thank Russell Reid for his ongoing guidance as our former Vice Chair. I’m very thankful for the growth of our new Trustee members.  Your unique experiences have brought new perspectives to our table, always with students at the forefront. I do consider it a privilege to sit as Chair of this Board.

Vice Chair Brent Rankin – Brent has represented Central Algoma as a Trustee with the Algoma District School Board from 2003 through 2010 and again from 2014 to now.  He has been motivated by desire to try and make a difference in the education of all Algoma District students and to bring the unique perspectives and issues from Central Algoma to the Board table.

Brent has run a small family business, including being editor of a community newspaper and co-manages an auto parts store.  He has been involved in municipal politics since 1981, having been deputy-mayor for one term, and mayor for a total of five terms. He has been on a number of other boards and committees over the years, including the Algoma District Homes for the Aged Board, the Algoma Manor Development Committee, the East Algoma Community Development Corporation, the Algoma Kinniwabi Travel Association, the Thessalon Library Board and the Sault Area Hospital Patient and Family Advisory Council.

Brent thanked Trustee SusanThayer for her nomination.  He shared that he has lots of ideas that may help to further advance the board and he looks forward to supporting and working with Chair Sarlo.

The Ontario Public School Boards’ Association (OPSBA) requests that each board appoint a Director to OPSBA Board of Directors and a Voting Delegate to the Annual General Meeting of OPSBA. Boards are also requested to appoint alternates for these positions. These appointments are for one year terms.

At the Inaugural Meeting the Board confirmed the appointment of Trustee Sheryl Evans-Price as Director to OPSBA Board of Directors and Voting Delegate for the Annual General Meeting of Ontario Public School Boards’ Association for 2020.

The Board confirmed the appointment of Chair Jennifer Sarlo as the Alternate for the Director to OPSBA Board of Directors and voting Delegate to Ontario Public School Boards’ Annual General Meeting for 2020.