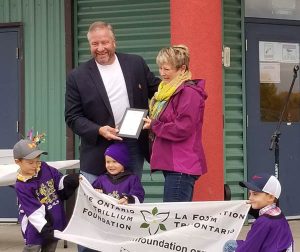 On Friday, the Eddy K. Lefrançois Recreation Centre welcomed members of the public to an Open House and ribbon-cutting ceremony to mark the re-naming and special capital upgrades to the Eddy K. Lefrançois Recreation Centre. Local MPP Michael Mantha was on hand to congratulate the Centre’s members on the work done after receiving a $150,000 OTF grant in 2019 and to hear more about how the improvements at the centre are expected to positively impact the upcoming recreation season.

“This investment by the Ontario Trillium Foundation to make capital upgrades to the Eddy K. Lefrançois Recreation Centre including making critical upgrades to the roof is great news for everyone in Dubreuilville, especially our youth. Investments such as this one will ensure that this important community space can be used by the community for years to come.” explained Michael Mantha, MPP, Algoma-Manitoulin

“The Eddy K. Lefrançois Recreation Centre is the heart of the community of Dubreuilville; a gathering place for all of our citizens. Therefore, the impact of this Ontario Trillium Foundation grant cannot be underestimated. This grant has allowed needed renovations to be made and we can now continue to offer quality recreation services and serve our community better.”  – Beverly Nantel, Mayor of Dubreuilville.

$150,000 OTF grant in 2019 funded a new roof and new interior doors. Upgrades to ice-resurfacing staging area have also been completed. The Eddy K. Lefrançois Recreation Centre is ground zero for fostering an active lifestyle for young people growing up in a rural, isolated Francophone community.

Eddy was diagnosed with Amyotrophic Lateral Sclerosis (also known as ALS, Lou Gehrig’s disease, or motor neuron disease) at the age of 22. At that time he was expected to live only 3 – 5 years. After several years, his focus changed from what the disease was taking from him. He explained “I focus my energy on what the disease has given me. All the opportunities that have been offered to me, things that would not have happened and people I would not have met.” At one time he travelled to Las Vegas and was tattooed with  “EXP: 04.97” indicating that he had surpassed his own “expiry” date.

Eddy refused to let his disease define him. He created a ‘bucket list’ and his friends and the community of Dubreuilville helped him to achieve it. He went sky-diving, deer hunting, fishing, snowmobiling, visiting New York City and Las Vegas. For his 25th year of living with ALS, Eddy visited Toronto, the Hockey Hall of Fame and at at the restaurant at the top of the CN Tower. Eddy became an ALS Canada Ambassador, raising awareness and funds for ALS research and support. His team is continuing that mission, and now the community of Dubreuilville will remember him with the newly renamed Eddy K. Lefrançois Recreation Centre. 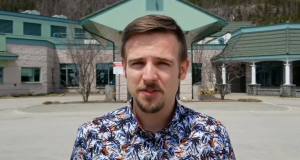 The LDHC & WFHT- How we’re staying safe during this pandemic 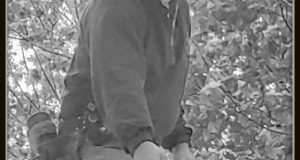