In August of 2016 it was disappointing to hear the update from Assistant Director Alex Patterson about the Wawa Beach House at Dr. Rose’s. For several years the beach house had been closed. Despite the lack of washroom facilities, Dr. Rose’s Beach continued to be the most popular beach in Wawa.

At that time we were told that the beachhouse was structurally unsound; this is a block building, and the concrete pad that is the foundation has shifted in the sand. “Talking with Paul Parisee, Chief Building Official, he’s looked at it with myself; and we have both come to the agreement that it is not a safe place for folks to be.” said Alex. It had been looked at during the 2015 Budget, and will be looked at again this year (2016); in order to replace the building.

Yesterday, June 19th, Dr. Rose’s Beach House was demolished. It will be replaced with another structure as part of “The Wawa Lake Waterfront Project”. Construction is expected to begin July 6th, and continue until October 1st. When speaking to the demolition team, Wawa-news heard that they had nothing but good comments on their working relationship with the Municipality. Efforts were also made to salvage some items from the Beach House. For example, if you have need of a urinal for, say a man cave – there are a couple up for grabs in a “free pile”. There is also a mirror in that pile.

This team will also be screening the sand on the beach. A 2mm screen will be used, meaning that anything larger than 2mm will be removed from the sand. This will create a beautiful beach for Wawa. 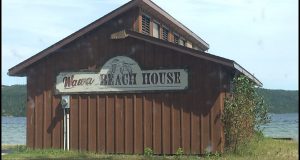 Wawa Beach House will need to be Replaced