NOT FOR SALE: Sex Trafficking in Ontario

Within Canada, the most common type of human trafficking that has been documented is sex trafficking. Sex trafficking involves the recruitment, transportation, transfer, harbouring and being in receipt of persons through means of threat, coercion, fraud, abduction and deception for the purpose of sexual exploitation. Although obtaining viable statistics to assess the populations most targeted by traffickers is not available, there is considerable data to indicate that the most common exploited group are Canadian women and girls, making up 90% of the targeted group, with the Aboriginal population being at higher risk. *Men and boys are also being trafficked but have been documented at lower numbers.

Human Trafficking is a lucrative, illegal and organized crime. Its profits are tied with illegal arms as the 2nd largest criminal activity in the world, just behind illegal drugs. Revenue acquired through sex trafficking make up the majority of the profits. It is a multi-billion dollar industry and requires very little overhead. Transportation of people is a lot easier than transportation of drugs or firearms. As well, since the product is living, it can be used repeatedly and generates a steady stream of profit. That is of course until the traffickers decide that the victim is no longer valuable due to a decline in health or an increase in age. It is very hard to imagine people as product, but to human traffickers, that is all that a human life is.

The physical damage to the victims is considerable – broken teeth, burns, malnutrition, forced tattoos and sexually transmitted infections are common.  The use of drugs and/or alcohol to control the victims is also very common.  The pimps exercise physical control over the victims and over time the control is as much psychological as it is physical.  The locks and chains are often PERCEIVED LOCKS/CHAINS. The traffickers have brainwashed their victims and have so much control over them that the victims really believe that they cannot leave their situation.  The psychological damage inflicted upon victims of human trafficking is so extensive and complex, it takes years of healing and mental health interventions to get these girls back to a place where they can begin their healing journey. Pimps know that by shifting between acting caring and threatening is a good way to keep their victims feeling loyal and intimidated.   The psychological abuse is so effective that traffickers have been known to spend years grooming a victim because they know once he has her under his control, it is extremely hard for her to escape his mental bondage.

This is why it is so important for people to recognize that this is happening and to spread the word and equip our youth and community with knowledge so that we can fight the battle through preventative measures. Human trafficking and sex trafficking are ghost crimes; masked behind deceptive relationships and held in place by fear and shame.

If you want to know more about sex trafficking and what you can do to equip yourself and or your children against it, please feel free to contact me at our office. There are resources available specifically to parents, service providers and community members that will be of great assistance in helping you fight this battle. If we can unite as a community through education and awareness about the prevalence of sex trafficking in Ontario, we may help prevent one of our youth from becoming a trafficked victim.

*It is important to note that traffickers and victims can be of any sex, religion, age, and race. The crime does not discriminate. For the purpose of this article and future articles, I will be referring to traffickers as male and victims as female as it is representative of the majority of human trafficking cases involving sexual exploitation. 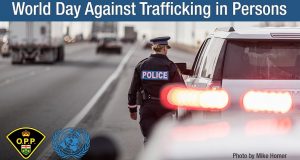