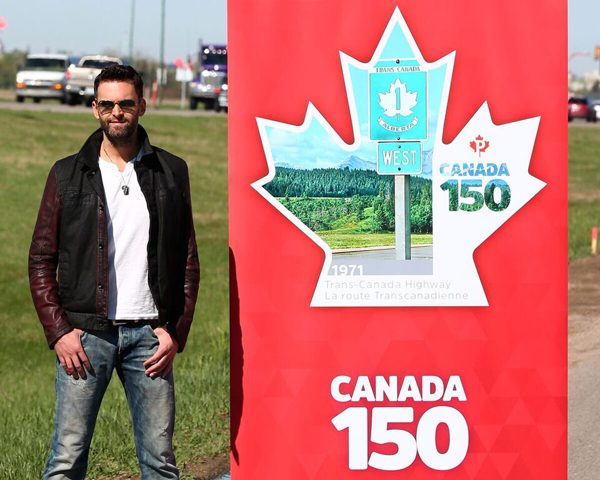 Country music star Dean Brody, while on tour, unveiled a stamp that captures the Trans-Canada Highway, the 8,000-kilometre ribbon of adventures, dreams and memories – and a key economic artery for Canadian business.

Brody, winner of multiple Juno Awards and more than a dozen Canadian Country Music Awards, took a few hours away from his cross-country arena tour – which is largely following the Trans-Canada – to unveil the stamp at the home of Brandt Group of Companies, located alongside the iconic highway. Headquartered in Regina with operations across the country, Brandt is an international success story that depends heavily on the Trans-Canada for its business.

The Trans-Canada Highway stamp is the fifth of 10 stamps being issued by Canada Post to celebrate Canada 150. The stamps mark unforgettable moments in Canada since our country’s centennial in 1967. Brody has travelled thousands of kilometres on the Trans-Canada Highway, chasing his dream and touring – as he is now, from Ontario to British Columbia. The highway, and the people and places he’s encountered along it, have inspired some of his music and songwriting. 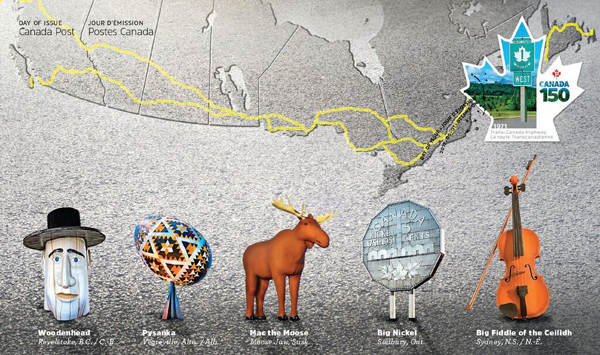 Trans-Canada connects our country
The Trans-Canada runs through all 10 provinces – from St. John’s, N.L. to Victoria, B.C. It is one of the longest national road systems on the planet, and links to roads that lead to Yukon and the Northwest Territories. Construction started in 1950 and the highway officially opened in 1962 – but it was not completed until 1971. Today, the Trans-Canada has multiple routes that connect almost every major city in Canada, and links to roads heading into the United States.

Distinguished by its white-on-green maple-leaf markers, the highway holds a special place in the hearts of those who’ve travelled it – by car, bicycle or on foot, or at the wheel of a transport truck – and even more so for those who’ve ventured along its entire length. It has fed our desire for adventure and fuelled our fascination with the open road, inviting family or buddy road trips for generations of Canadians.

A highway of dreams and possibilities
Its endless lonely stretches are legendary; its stunning vistas are unforgettable. To know this highway well is to have hard-earned respect for Canada’s weather and Canada’s immensity – and to appreciate the friendliness of its people. From singers and bands to job-seekers, junior hockey teams and students heading off to college or university, countless Canadians have taken this highway to their dreams.

A vital economic link for Canadians
Communities and Canadians also rely on the Trans-Canada for their livelihoods every day. A perfect example is the Brandt Group of Companies, which hosted Canada Post’s Trans-Canada stamp launch at one of its facilities alongside the highway. Brandt employs nearly 2,000 people across Canada and the U.S., servicing markets in over 20 countries and six continents. It relies heavily on the Trans-Canada for its agricultural, construction and railway equipment business.

Five more Canada 150 stamps to come
Each stamp in the set has been unveiled by a distinguished Canadian individual or group related to the moment being celebrated. The location of each stamp launch also directly relates to the moment being commemorated. The stamp celebrating Expo 67 was unveiled in Montréal by Habitat 67 architect Moshe Safdie on April 27, while the stamp honouring the Constitution and the Canadian Charter of Rights and Freedoms was unveiled on Parliament Hill on May 3. The third stamp, which pays tribute to the Canadarm and Canadian innovation, was unveiled by Canadian Space Agency astronaut Jeremy Hansen at a recorded event at a Toronto school and released online May 4.

The fourth stamp, commemorating the 2005 passage of the Civil Marriage Act – which made marriage equality the law in Canada– was unveiled in Toronto on May 9 in partnership with The 519, an organization that supports the LGBTQ community. The next stamp in the Canada 150 set will be unveiled in St. John’s on May 25.

The remaining stamps will be revealed individually at cities across the country, the last of them on June 1.

About the stamp
Each of the 10 maple-leaf shaped die-cut PermanentTM domestic-rate stamps measures 40 mm x 40 mm and is printed in 6 colours plus tagging. The self-adhesive stamps are available in a booklet of 10 (4 million stamps). A gummed pane of 10 stamps, with circle perforations 4.5 cm in diameter, is also available (80,000 panes). Official First Day Covers, one for each stamp design and each cancelled in OTTAWA ON, are available in a pack of 10 (10,000 packs). The stamp issue was designed by Roy Whiteand Liz Wurzinger of Subplot Design Inc. in Vancouver, B.C., and printed by the Lowe-Martin Group.