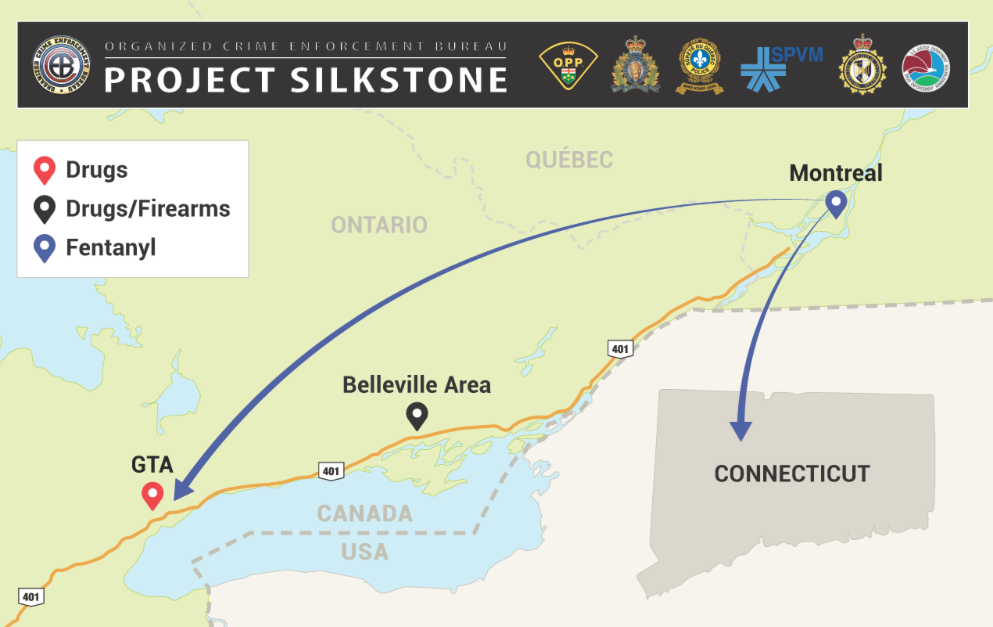 Several Ontario and Quebec residents face numerous charges following a multi-jurisdiction investigation into illegal firearms and the trafficking of illegal drugs in Ontario, Québec, and the United States.

Project SILKSTONE began as a high-level Organized Crime Enforcement Bureau (OCEB) investigation targeting multiple criminal groups involved in trafficking illegal drugs and guns along the Highway 401 corridor between the Greater Toronto Area, through the Belleville/Bay of Quinte Region and Montréal, Québec. The investigation also revealed drug trafficking activities to and from the United States.

Project Silkstone investigators seized 23 firearms including three (3) pistols and 20 long guns, $69,000.00 in Canadian currency and $500.00 in U-S currency, $50,000.00 worth of casino chips, equipment and supplies from an illegal identity card-making operation, Radio Frequency (RF) detecting devices, and ‘colours’ from an outlaw motorcycle gang. In addition, four (4) vehicles, an enclosed trailer and a snowmobile were seized as offence-related property.

OPP have charged 18 people with 81 offences including charges relating to the Controlled Drug and Substances Act (CDSA) and the Criminal Code of Canada.

The accused persons were held in custody upon arrest and are expected to appear at the Ontario Court of Justice in Belleville at various times and dates. The investigation continues.

To find out more about the dangers of fentanyl and short term antidotes, we encourage everyone to visit www.facethefentanyl.ca , part of an awareness campaign supported by the Ontario Association of Chiefs of Police (OACP).

The Ontario Provincial Police Organized Crime Enforcement Bureau (OCEB) has a mandate to work with its partners to facilitate the disruption and suppression of criminal enterprises, which affects the citizens of Ontario. OCEB provides members and operational support to investigations on a provincial, national, and international level, working in cooperation with law enforcement agencies from around the world.

“By dismantling a criminal operation of this magnitude, we’ve literally prevented more than 11-thousand ‘doses of death’ of fentanyl and illegal guns from killing people in our communities. Project SILKSTONE again demonstrates how effective law enforcement is at working together to target criminality. Police leaders continue to send a very clear message to criminals that – regardless of jurisdiction – police will continue to identify and aggressively pursue those individuals who threaten public safety.”- Deputy Commissioner Rick BARNUM, Provincial Commander OPP Investigations and Organized Crime