This all began early Thursday morning with a thunderstorm wth sideways rain. The photograph below was taken, at 9:30 a.m. You can see the rain beating on the roofs of the cars and the street. 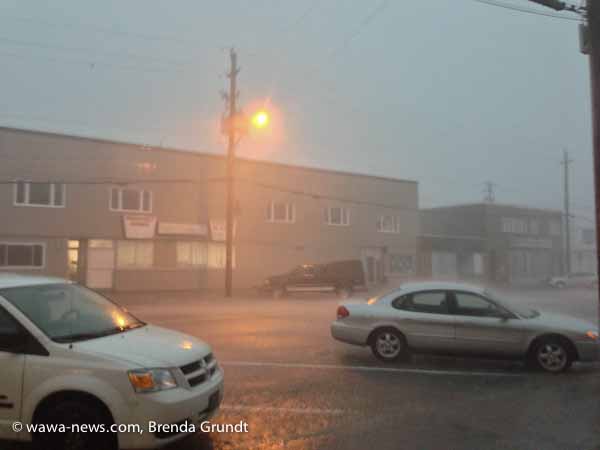 The rain continued off and on all morning, until the word was out – there was at least a foot of water on Highway 101 just outside of town. 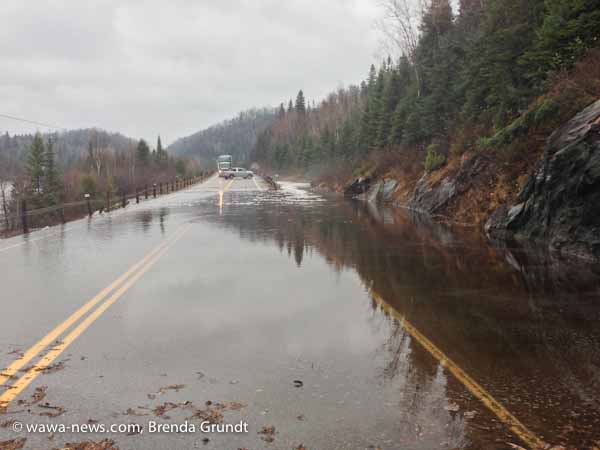 Although the water looks quite placid in the above photo – looks are deceiving. 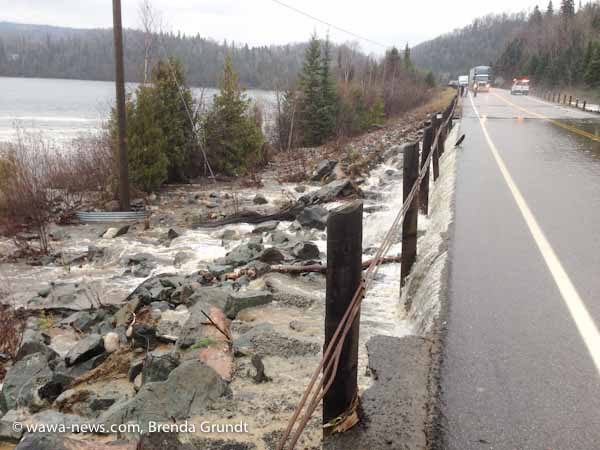 The rush of water has washed away the shoulder and is nibbling underneath the pavement. The guardposts are almost hanging from the guard wires. 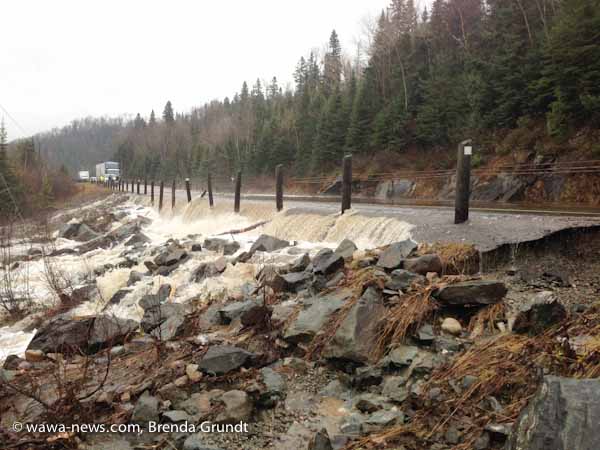 Underneath at the Lady Dunn Health Centre – there is at least 2 feet of water running through at the time of this photograph. 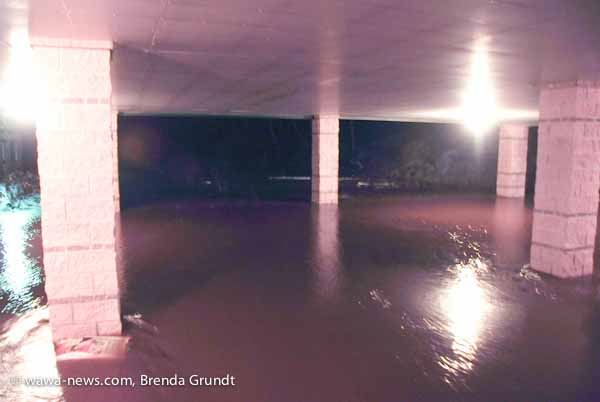 Looking out on Wawa Lake, it was amazing to see the debris and the turbulence created by the rushing waters. 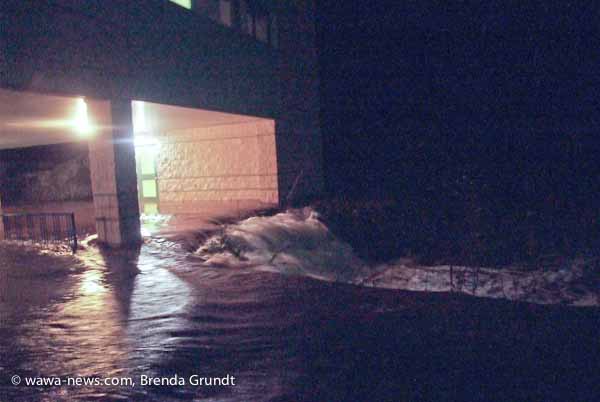 A drive along the waterfront showed that the water in the streets was overflowing the curbs and making its own way to the beach. 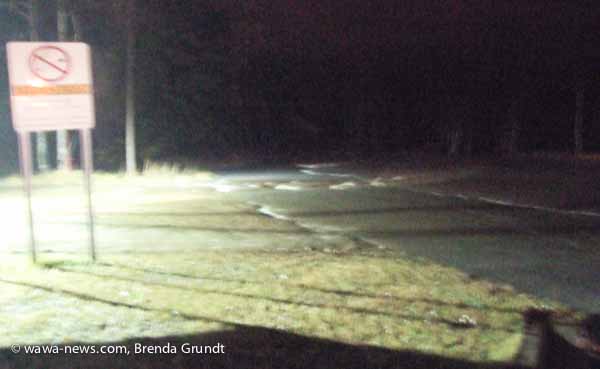 The section of road along the water (Bottom of Caverhill) was completely flooded, here as well the water was overflowing the water drains and making its own way to Wawa Lake. 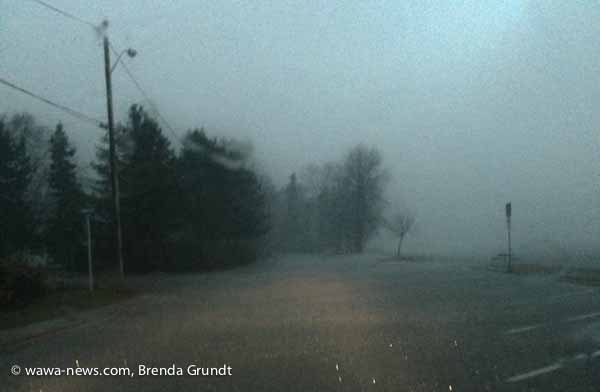 The same situation was repeated along Wawa Street! There were many areas in town that had standing water on the roadways. There was simply nowhere for the water to go, but in the overloaded drains that mostly lead to Wawa Lake. An incredible amount of sediment, leaves, and debris was funneled into Wawa Lake during the day’s rainfall. 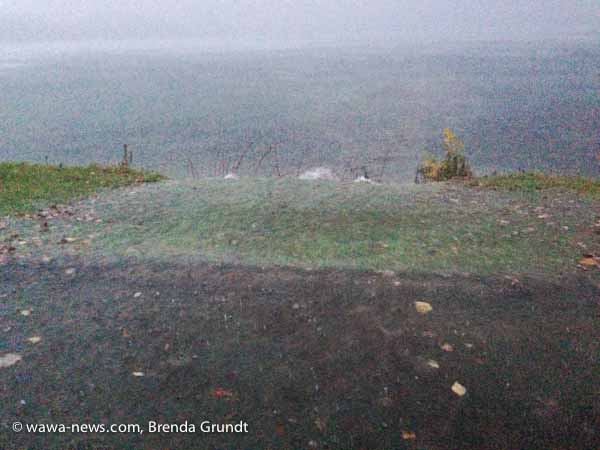 Here you can see the water rushing over the curb and into the lake. 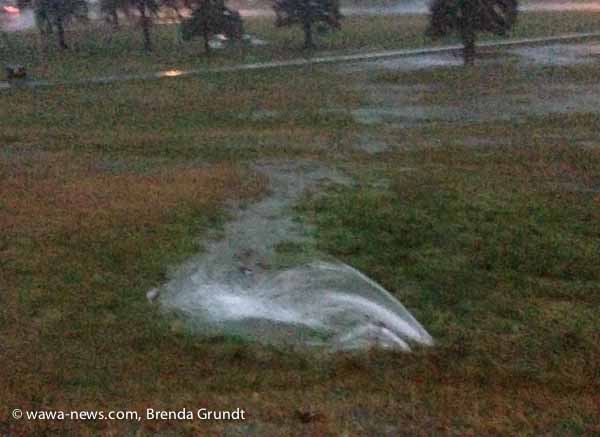 At Queen’s Park, the fury of the water can been seen as it sprays out of the ground and continues down towards the cenotaph. After checking out the park, we decided to make our way to see whether the level of the lake had increased with all the extra water flowing into it. 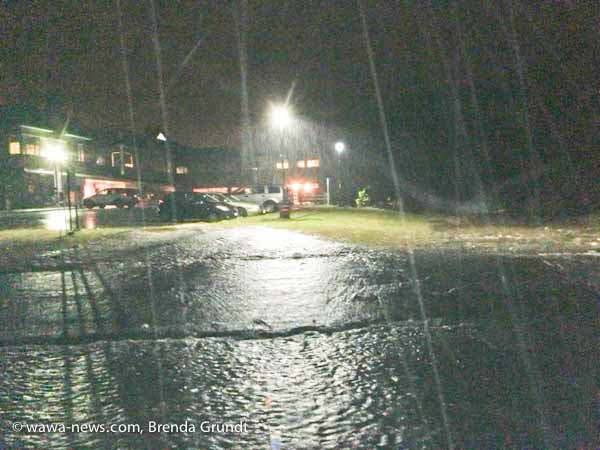 This is the bottom of the Lady Dunn Health Centre. The creek that runs at the base of the Mine Hill, and all the homes along Government Road had overflowed its banks in an alarming display of power. A number of Wawaites whose yards adjoining the creek all experienced flooding, some to greater extents than others.

Underneath the Lady Dunn Health Centre, the water was very murky with sediment, and was at least 2 feet deep.

Water running over the grass from the creek behind the LDHC. From there we decided to go home, but along our way we heard that there was flooding on Hwy. 17N to White River. The highway we discovered was flooding at Catfish Creek (just south of Silver Birch Cottages at end of Catfish Lake) 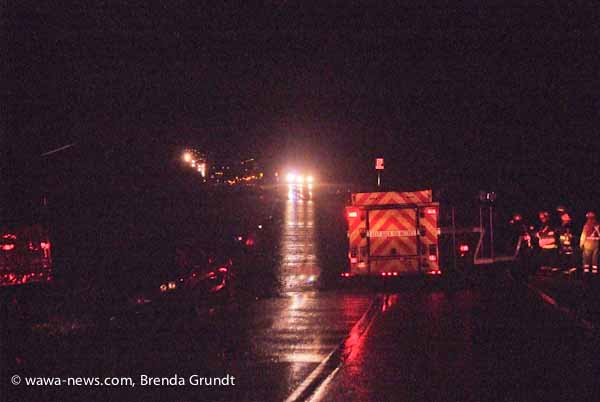 There a tractor trailer was going through the flooded area and hit with enough force that the load in his trailer shifted forward breaking the front wall of the trailer. The load was of batteries, some of which were lost. Wawa-news was unable to get any more information – there was so much going on, that we didn’t want to bother them. 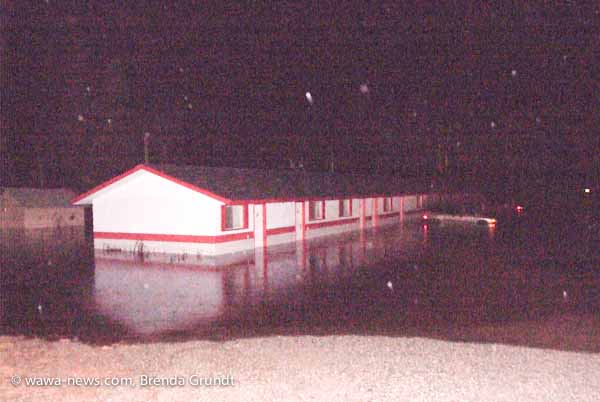 At the Northern Lights Hotel, the lower section was beginning to be flooded. This photo was taken at 9 p.m. 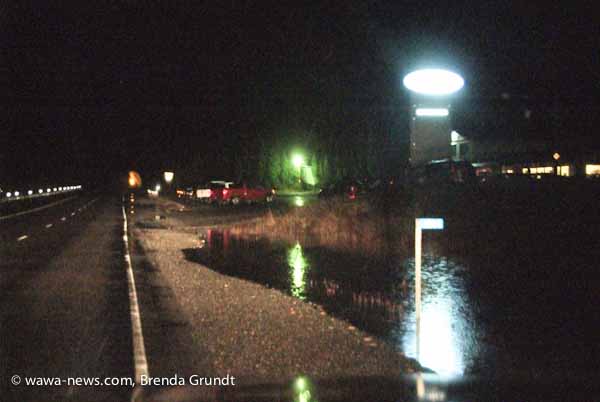 The ditches was begining to fill with water that couldn’t all flow down the culvert. The was causing the water to back up and create a flooding situation.

At the time of this report, Highway 17 from Wawa to White River is still closed, with two washouts, The Tremblay Flats road also remains closed, as is Hwy 101 to Chapleau. The last highway to close was Highway 17 from Wawa to Sault Ste. Marie. Wawa-news has been told that the lower portion of the Northern Lights Motel has collapsed. There is no word on the main part of the building, or the Northern Lights Ford dealership.

The Municipality of Wawa declared a state of emergency early this morning.