How did COVID19 affect the economy of Northern Ontario? 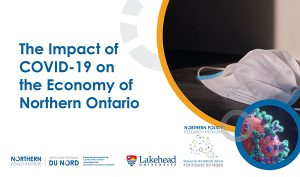 The COVID-19 pandemic was a major blow to communities around the world. However, as the latest paper by Lakehead University in partnership with Northern Policy Institute has shown, not all communities’ experiences were the same. The Impact of COVID-19 on the Economy of Northern Ontario dives into those differences, specifically between that of Northern and Southern Ontario from an economic perspective.

The authors found that that infection rates were much lower in Northern Ontario than in Southern Ontario, and the timing of the waves of infections in the North did not match up with those in the South. Even in the North there were differences in the infection rates across public health units. Potential reasons for this include a regional industrial composition difference that could influence the ability of shutdowns to be effective, as well as Northern communities, are less densely populated.

Additionally, the first wave of COVID-19 resulted in a slightly less reduction in employment in Northern Ontario than in the rest of the province, but in the second wave, the North experienced a much greater fall in employment. It could, partly, be due to the cyclical nature of Northern Ontario’s economy. Furthermore, the male employment rate dropped more severely in Northern Ontario compared to the province while females, on the other hand, were less likely to become unemployed due to their over-representation in the public sector. More males were employed in the private sector, which was more responsive to the crisis.

“One of the goals of this paper is to arm decision-makers, community practitioners, business owners, and others, for potential crises in the future,” said Dr. Karl Skogstad from Lakehead University, who is one of the four authors. “And more than that, it underlines the continued need to recognize the distinct realities of Northern Ontario in policy-making.”

Based on the findings, several policy recommendations were presented, including: