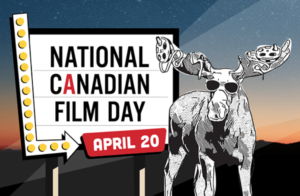 National Canadian Film Day, presented by Reel Canada, is a massive one-day, coast-to-coast-to-coast celebration of Canadian cinema. With the weather turning stormy today – perhaps a movie night featuring movies filmed on the shores of Lake Superior may be just the thing to watch tonight.

Two films in particular may be of interest in this year’s choices:

Brotherhood takes place in 1926 and follows a band of teenage boys who set out across Ontario’s Balsam Lake in a 30-foot war canoe, with two camp leaders, and are capsized by a deadly summer storm.Principal filming took place at Michipicoten First Nation.

Angelique’s Isle is based on a true story set in 1845, the film stars Julia Jones as Angelique Mott, an Anishinaabe woman who accompanies her voyageur husband Charlie (Charlie Carrick) on an expedition to search for potential mining sites during the Copper Rush, only to be abandoned on an island in Lake Superior and forced to survive the harsh winter on their own. The movie features scenes set at Fort William Historical Park, Cascades Conservation Area and along the shores of Lake Superior in Terrace Bay.

Both films (and more) available to stream on the free CBC Gem streaming service (https://gem.cbc.ca).