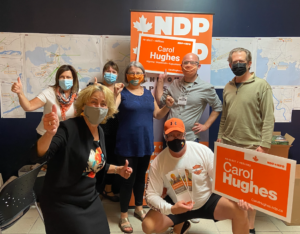 Voters in Algoma-Manitoulin-Kapuskasing have made the choice to send Carol Hughes back to Ottawa as Member of Parliament for their constituency.

The NDP candidate noted the election was unique with the pandemic informing all aspects of her campaign.

“This was different, but I was fortunate to have a great team that was willing to take the precautions so we could talk to voters,” said Hughes. “Also, the fact that it was mostly a summer election meant that the last two weeks were crucially important, and I appreciate how many people gave of their free time to help get the result we hoped for.”

Hughes had a message for the voters of Algoma-Manitoulin-Kapuskasing and for the candidates she ran against.

“I’m honoured to have been chosen by the voters.  We know we are offering people a good choice, so it’s nice to have that validated at the ballot box,” said Hughes. “I’m also honoured to have shared the ballot with all the candidates who put their names forward.  It isn’t always easy to stand for election and I respect the commitment of anyone who runs for office.”

Hughes feels the next parliament will be similar to the last one, given the minority situation.

“No matter what shape this parliament takes, New Democrats will continue to fight for the issues that matter the most,” said Hughes. “My priority remains ensuring the people of Algoma-Manitoulin-Kapuskasing are well represented and that the issues of this riding and Northern Ontario are at the forefront.  I am proud of the work my staff and I have done, we always put constituents first and nothing will change there.”