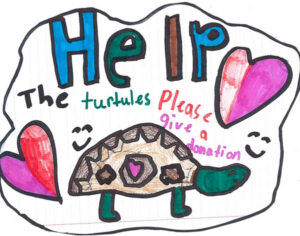 Thanks to the encouragement of their teacher Ms. Kelsey Boisvenue, grade 5 students at École Saint-Joseph (Wawa) saw a normal reading activity become an impressive community project! The book La tortue musquée, une espèce en danger (The Eastern Musk Turtle, an Endangered Species) definitely captured the attention of young readers. The students learned about the causes that led to the turtle’s disappearance and searched for photos. They became convinced of the importance of protecting and maintaining Ontario’s turtle ecosystems.

The students then approached their teacher with posters and ideas for helping the turtles. Through their research, they identified the Ontario Turtle Conservation Center, which helps turtles. Ms. Kelsey, with the support of educator Ms. Annette Morden, continued the research and was able to purchase a turtle adoption kit. As part of the kit, students obtained the story of a turtle that the organization found, rehabilitated, rescued and freed. 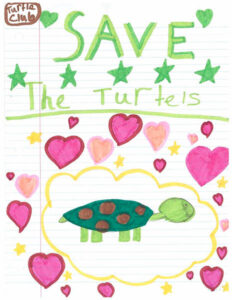 The students involved their families and friends in this campaign. As a result, families held and promoted activities via Facebook to raise funds that will be sent directly to the organization.

As part fundraising initiatives, students produced and sold cupcakes and key chains in the shape of a turtle! What a great initiative!

East Algoma OPP – Driver Flees from Police and is arrested