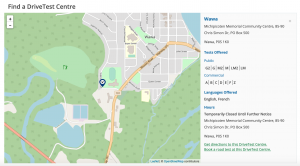 Our MPP Michael Mantha continues to press the Hon. Caroline Mulroney, Minister of Transportation about the lack of access that Northern Ontarians have to DriveTest Centres within our region. Wawa has a DriveTest location at the Michipicoten Memorial Community Centre but the website says, “Temporarily Closed Until Further Notice”.

Below is a copy of an open letter sent to Hon. Caroline Mulroney, Minister of Transportation, regarding the this, again.

I am once again writing to you on the matter of the lack of access that Northern Ontarians have to DriveTest Centres within our region.  Complaints on this matter were first brought to the Ministry’s attention by the North East Superior Mayors Group (NESMG) in February of 2018.  When no satisfactory response was received by the NESMG, I wrote a letter of support to the Minister on this matter.

Even now after more than 2 years, in addition to the NESMGs complaints, my office continues to receive many emails, letters and telephone calls from constituents and business operators who are increasingly frustrated.

Citizens and business operators in Northern Ontario continue to experience significant disadvantage compared to Ontarians from other regions because of the lack of access to DriveTest centres when they need it most.

In your response to me dated Sep. 20, 2019 you stated, “All requests for road tests can be met if applicants schedule an appointment.”  Mr. Larry Lacroix, owner and operator of Lacroix Bus Lines, would beg to differ with you on this claim.  His company is responsible for providing school busses and drivers for the Chapleau area.  With the COVID-19 pandemic situation, he finds himself in urgent need of school bus drivers.  His employees had a test appointment arranged but after travelling for hours, when they got to the centre it was closed without having issued any notification.  He was counting on that driver to start driving busses the next morning. This left his company in a terrible positon, this putting school children’s safety at risk. What’s worse is that this is far from the first time that this has happened to Mr. Lacroix.

This experience is not unique.  DriveTest Centre clinics are rarely scheduled in winter months.  In one of your responses to my letters you stated, “Due to the nature of winter conditions, DriveTest does not offer services in this geographical region from December to April.”  You explained that the Ministry was not about to put DriveTest employee’s safety at risk (this despite the fact that Northern Ontarians drive the same wintery roads that MTO is supposed to keep safe and clear, year after year).  Clearly in your opinion this level of service – or should I say lack of service – is completely acceptable.  I challenge you to provide the same reduced level of service to the entire province and see what the response is from the general public.  I tend to believe the public outcry would hit newspaper headlines above the fold across the province. If it is not acceptable to all Ontarians, how can you possibly justify providing substandard service to Northern Ontarians.

In a previous letter you also stated that, “The ministry and DriveTest are committed to service delivery improvements and responding to the public’s needs.”  I can assure you that Northerners see no evidence of such a claim – even after repeated appeals spread over several years, there has been no improvement or change.

As you know, in addition to driver license testing, DriveTest is also responsible for providing testing for security guards.  I received a letter from Kelly Lamontange, the Industry Liaison for Keepers of the Circle, a group that supports Aboriginal Women in Mining (AWIM).  The AWIM facilitates pre-employment training for Indigenous women and support them in finding meaningful employment in the mining industry. They have trained 478 Indigenous women, 301 of which have been successful in obtaining gainful employment.

Ms. Lamontagne explains that they are continually frustrated by the lack of access Indigenous women have to the Security Guard License testing.  Once again, the sole service provider for this is DriveTest.  The service they provide could at best be described as sporadic.  After completing their training, applicants are forced to wait weeks and even months before testing can be scheduled.  In one situation they had nearly 30 Indigenous women who had full-time jobs waiting for them subject to getting their license.  But DriveTest would not accommodate any requests for special consideration for scheduling a group test. They refused to consider suggestions of online testing nor would they consider the suggestion to have the local companies pay for any travel expenses, meals and accommodations to send DriveTest personnel to a central community in the North.

The Ministry hires service providers to provide the services that Ontarians need.  However, the evidence is abundantly clear that DriveTest and the Ministry are failing to meet the needs of the people.  As a result, MTO is having a direct, major negative impact on unemployment, job security and poverty.  As well, by not providing timely testing all year round, they put the general public’s safety at risk as there are not enough workers with qualifications for emergency vehicle operation, snowploughs, school busses and so on.  This fact means that workers who do have the qualifications are forced to put in extra hours behind the wheel, thus endangering the public.

You will be interested to know that this is in fact the fourth letter that I have written on this subject, three of which have been addressed to you directly.  You have refused to take any direct action and keep MTO’s commitment deliver improved service that actually does meet the needs of ALL Ontarians.

MTO has permitted this entirely unsatisfactory situation to drag out without any consideration to actually address the issues.  The Ministry determines what service standards are needed and work out agreements with the providers.  However clearly this is a situation in which the tail is wagging dog.  It is time for the Province to stand up for the People of Ontario and make the necessary adjustments.

Thank you for your attention to this most important concern.  I look forward to your prompt reply.