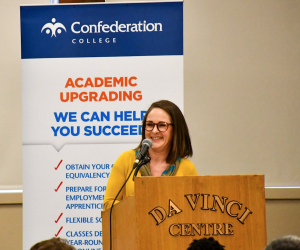 Confederation College celebrated and recognized the accomplishments of 211 students from its Academic Upgrading program with a formal ceremony (February 20th, 2020). Students were presented with certificates, awards and bursaries in recognition of their completion of academic upgrading courses. Twelve students received Academic and Career Entrance (ACE) certificates, provincially recognized as a Grade 12 equivalent.

“We are extremely proud of our students and honoured to celebrate their accomplishments,” said Kathleen Lynch, President of Confederation College. “The courage they have demonstrated in upgrading their skills and the dedication they have shown for their studies is inspiring. Through the support of the Academic Upgrading program, each graduate has laid the foundation for continued success in their future postsecondary studies and careers. We hope many of them will choose to continue their studies at Confederation College.”

The Academic Upgrading program offers an individualized approach to learning and prepares students to meet their educational, apprenticeship and/or employment goals. The program focuses on upgrading mathematics, communications, biology, chemistry, physics and computer skills. Following the completion of the preparatory courses, students can gain direct entry into postsecondary programs and apprenticeships, and/or earn their ACE Certificate.

Each year, approximately 90 graduates from the Academic Upgrading program go on to postsecondary education at Confederation College and many of those students excel. A recent report from the College Sector Committee for Academic Upgrading, titled Prepared for Success 2017-18, proved that adult learners who complete academic upgrading programs in Ontario’s 24 public colleges are well-prepared to succeed in postsecondary programs.1 In fact, it found that the average pass rate for first semester students in all programs is 77 per cent and more than 74 per cent of students had the necessary grades to enroll in second semester programming.

One student who was celebrated at the ceremony today, was Heather Denis who at 16 decided she was finished with school. She later returned to complete her high school diploma at the age of 20 and now, 21 years later she has returned to school once again. “Unfortunately, because of the choices that I made as a teenager, I did not have the grades or the courses that I needed to get into the postsecondary programs that I was interested in,” she said. “I did go on to get a degree, raise a family, and have a career that I enjoyed, but I always knew that I wanted to do more. As my kids were getting older, I realized that I might have a second chance to pursue the education that I’d always dreamed of. So I took the leap. I quit my job and found myself back in the classroom for the first time in many, many years.”

Denis struggled at first but has persevered and is now being recognized for her completion of Academic Upgrading courses. “In the beginning, I was completely exhausted, mentally and physically, but slowly I began to adjust and started to enjoy what I was doing,” she said. “The amazing thing about this program, is that even in the courses that have a specific schedule, there is so much flexibility. My teachers encouraged me to do the work how, where and when I needed to in order to be successful. This program not only provided me with the opportunity to learn how I learn, but it gave me the confidence that I could be successful as I continue to pursue postsecondary education.”

Denis has been accepted into the Honours Psychology Specialization program at Laurentian University with plans to start the next leg of her journey this September. “This program has given me the opportunity to do the things I’ve always wanted to do,” she said. “I’m well on my way to accomplishing some important lifelong goals and I am so grateful.”

Recognition Day is a highlight of the academic year as Confederation College showcases the accomplishments, dedication and success of learners from Thunder Bay and throughout the region. A number of awards, certificates and bursaries were presented along with academic achievement and leadership awards.