The Honourable Andrew Scheer, Leader of Canada’s Conservatives and the Official Opposition, issued a statement on the CN Rail Strike:

“The CN strike is hurting all aspects of our economy, from agriculture, to manufacturing, to mining. That is why Justin Trudeau must recall Parliament as soon as possible to enact emergency legislation to get the rail cars moving again.

“In the West, the CN strike poses a devastating threat to an economy in crisis. Already reeling from delayed pipeline projects, a rail strike means even less Western Canadian oil that can reach markets. And after an especially challenging harvest season, Western Canadian farmers would be further squeezed if the strike is allowed to continue.

“Not only does this strike threaten key sectors of the Western Canadian economy, but Canadian jobs across the country.  We could see terrible jobs losses in the mining sector in Quebec, the forestry sector in British Columbia, and the automotive sector in Ontario.

“Recalling Parliament and tabling emergency legislation would show both sides of this dispute that the government is serious about ending the strike. That could result in an agreement being reached much sooner.

“Once again, I urge Justin Trudeau to convene Parliament immediately to get CN back on the job and to avoid the pain and economic calamity an ongoing strike would cause for Canada.” 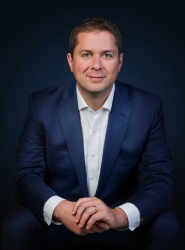 Andrew Scheer
Andrew James Scheer PC MP (Regina—Qu'Appelle) since 2004. He has been Leader of the Conservative Party and Leader of the Official Opposition since May 2017.