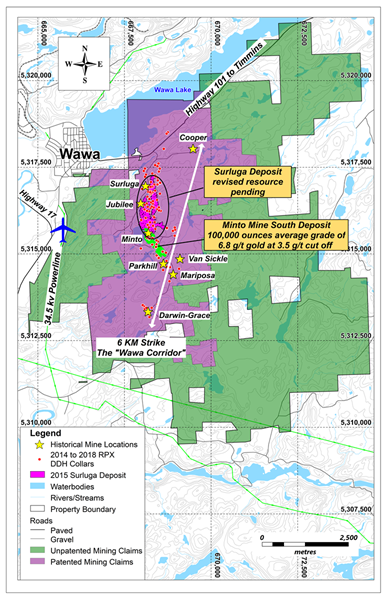 Red Pine Exploration Inc., in anticipation of the revised resource estimate for the Surluga Deposit, provides the following update on its Wawa Gold Project, located 2 kilometers southeast of Wawa, Ontario.

The Company has now finished compiling the results from its 2018/19 drill program that will be included in the new resource estimate for the Surluga Deposit expected at the end of June 2019. A total of 39 holes for 11,317 metres of drilling was completed at the Surluga Deposit with the aim to shift the deposit from a lower-grade open pit to a higher-grade underground resource.

The 2018/19 Surluga Deposit resource expansion program included infill, confirmation and exploration drilling intended to expand and fill in areas of the deposit that were either never previously tested, or given a value of “0” in the previous resource estimate. Results, as reported in previous news releases (see news releases of August 14, 2018, March 1, 2019 and March 4, 2019), indicate new, high-grade gold zones within, above and below the current resource. The new resource will also incorporate the results (see news release of October 4, 2016, November 22, 2016, December 7, 2016, December 20, 2016, January 10, 2017 and January 19, 2017) of the Company’s sampling of 42,000 metres of historic drill core (from 318 underground and 119 surface drill holes) that were not assayed by previous operators and that showed significant gold intercepts, also were not included in the previous resource.

Red Pine’s drilling to date totals more than 59,900 metres, with extensive exploration drilling to the north/northeast and south of the Surluga Deposit. This led to the discovery of the Wawa Gold Corridor, a gold mineralization zone that extends at least 6 kilometres, and the delineation of the new, high-grade Minto Mine South Deposit, with a resource of 100,000 ounces gold at an average grade of 6.8 g/t  at a cut-off grade of 3.5 g/t gold (Initial Technical Report for the Minto Mine South Property, Golder Associates Ltd., effective Nov. 7, 2018)  in the area adjacent to the south of the Surluga Deposit (Figure 1). The Minto Mine South Deposit is open in all directions and the Company believes that the resource can be expanded significantly. It will be the subject of extensive exploration in the near future. The recent discovery of the Cooper Gold Structure, 1 kilometre east of the northernmost extension of the Surluga Deposit supports Red Pine’s belief that more than one Minto-like deposit exists on the Wawa Gold Property.

“We look forward to receiving the revised Surluga resource estimate. We believe it will support the work we’ve done over the past 4 years and show how we’ve improved the economics of the resource. All our geological and geophysical modelling have also shown us that gold mineralization extends beyond what we initially anticipated, and we know that we’ve only scratched the surface of what is possible at Wawa.”