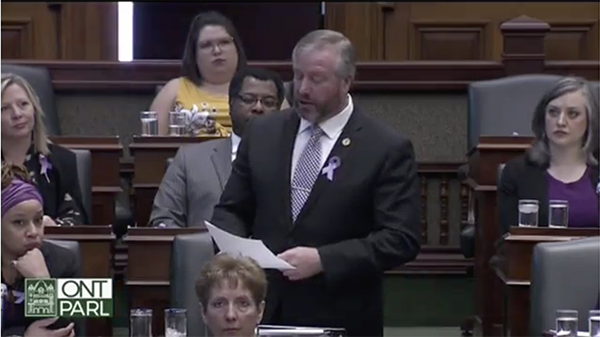 During question period on Tuesday, NDP Northern Development critic Michael Mantha said the Ford government must ensure access to wood supply for northern mills and forestry operations, to support the hundreds of jobs that depend on them.

Mantha said the future of one mill in Fort Frances is in jeopardy, and another mill in Thessalon is cutting jobs because the Ford government is failing to allocate wood supply. “Your government controls the wood rights on crown lands. It also has the legal obligation to involve First Nation communities in meaningful consultations, but like the Liberals, this government is sitting on its hands instead of taking action,” said Mantha, MPP for Algoma-Manitoulin, during question period in the legislature.”

“A company wants to use wood from the Crossroute Forest to bring back forestry jobs to Fort Frances.  The town contends another company is transferring Crown fibre from the Crossroute Forest to its other operations in northwestern Ontario, contrary to the terms in the Sustainable Forest License agreement. And just last week a 30 per cent workforce reduction was announced at Midway Lumber in Thessalon. Will this government tell the families from Fort Frances, Thessalon and across the North, that it will ensure that mills and forestry operations have the wood they need to operate and support the hundreds of direct and indirect jobs that depend on them?”

Mantha said that over the last 15 years, mills and forestry operations have closed all over Northwestern Ontario.  That includes at least five in Thunder Bay, two in Dryden, two in Kenora, one in Sioux Lookout and one in Fort Frances. “Those closures came with devastating job losses that hurt thousands of families,” Mantha said.

Mantha reminded the Ford government that in 2014 when the PCs were in opposition, they supported wood allocation to reopen the Fort Frances mill — only to reverse position now and fail to come to the table.