The Wawa Legion Branch’s appeal for financial assistance (“Lift for the Legion”) has prompted me to think about my association with the local Legion, commencing when I was in public school and the concrete forms for that building were put in place. My Dad (Neil Morrison) took me to the construction site because they said they had a job for me. I was thin enough that they could lower me down between the 12 inch wooden forms to sweep up all the pine cones, wood chips and construction debris. It’s a good job I wasn’t claustrophobic. I recall some local boys throwing down sticks for me to pick up, until they were shooed away.

When I was 12 – 14 years old I was bat boy for the Legion ball team in the summer and stick boy for the Legion hockey team in the winter. I bonded with all of them as they coached me in life lessons for many years. I just picked up their bats or fetched hockey sticks for them but I know now that I was given many opportunities because of my volunteering with them.

It doesn’t seem long after that before I joined the Legion ball team at first base. Our league was the Mine, the Plant, and the Legion (town). The Plant and Mine had some pretty good players as they recruited them from out west and gave them jobs to keep them here. We were just the locals with only local experience, however if WE won, it was free beer after the game!

Eddie and Ellen Kane worked very hard with the youth in Wawa by holding various events for the different age groups. After I turned 21, my friends (Spike Spreng, Mike Jennings, Tom Leveque, Dick McArthur, Nick Krpan, etc.) and I were all “eligible” bachelors, looking for a good time. So Ed and Ellen held Saturday night dances at which we spent a good bit on refreshments. In mid week Ed or Ellen would contact one of us to see if we were going fishing next weekend or dancing. If we said “fishing”, the dance was occasionally postponed till the next weekend.

Over the years the Legion has been a mainstay for various events – wedding receptions, family gatherings, political speakers, etc. etc., particularly since the Polish Hall closed. Their luncheons and Wing Nights and other occasions have encouraged community fellowship. While their ranks are shrinking, the Legion is still a major part of our community. They have been working hard to make the Legion Hall wheelchair accessible, almost a necessity as we age and our strength becomes limited. The building is ready to house the lift and now they need $100,000 in order to install it.

It’s such a worthwhile project that it behooves all of us to support it, in honour of all the times the Legion has been there for us over the years. Donations can be made by e-transfer to [email protected], mailed or delivered in person to the Municipality of Wawa, 40 Broadway Avenue, P.O. Box 500, Wawa, ON P0S 1K0.

There must also be many former residents who have good memories of their own who would be willing to help. Cheques can be made out to “Lift for the Legion” and any donation over $100 will be publicly acknowledged on a plaque to hang in the Legion Hall. Tax receipts for all donations over $50.

We can do it Wawa! 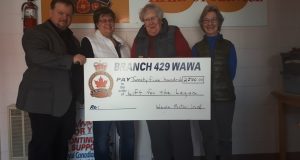 Wawa Motor Inn Donates towards Lift for the Legion Campaign

From the Branch – March 7 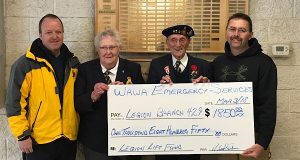 Wawa Emergency Services Make Donation to ‘Lift for the Legion’