Wesdome Gold Mines Ltd. is pleased to provide the results from the initial underground drilling of the Kiena Deep A Zone completed from the exploration ramp development at its 100% owned Kiena Mine Complex, in Val d’Or, Quebec.

Development of the Kiena Deep exploration ramp at the 1000 metre level commenced early August 2017 and is now finished with a total of 986 linear metres completed to date. In sequence with the ramp development, drilling of the Kiena Deep A Zone has commenced and the first 7 holes have been completed. This drilling is designed to better define and extend the A Zone, where drilling in 2016 returned a number of encouraging results, including 192.95 grams per tonne gold (“g/t Au”) (18.80 g/t Au cut) over 16.95 metres core length from the discovery hole 6125.  (See news releases dated August 24, 2016 and November 15, 2016). 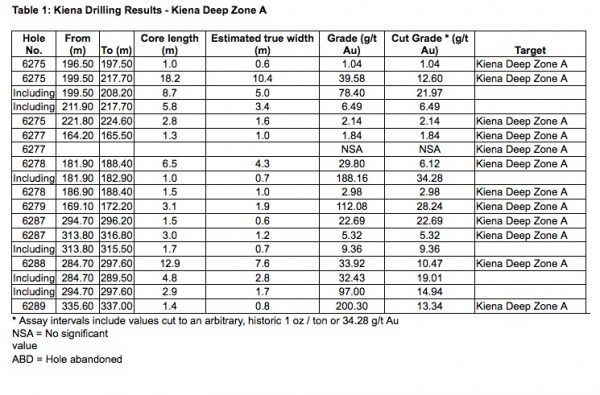 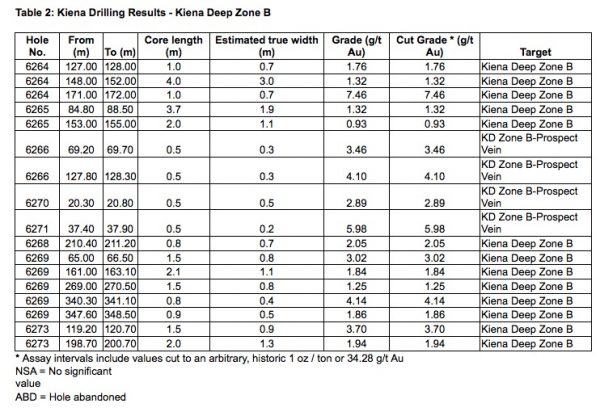 Mr. Duncan Middlemiss, President and CEO, commented “We are pleased with the recent drilling results from Zone A that confirm the previous high-grade results from this zone, and continuity in this area. It is our goal to continue to better define the extent and geometry of the gold mineralization in advance of an updated resource estimate near the end of the year. This zone remains open up and down plunge and along strike to the northwest, and will be the focus of the ongoing drilling program.”

“Additional development and drilling platforms are being established in April to test the Upper Quartz Zone, where previous drilling encountered an intercept of 94.4 g/t Au ( 18.03 g/t Au cut) over 17.4 m core length. Wesdome continues its accelerated drilling program with the goal of determining the extent, continuity and geometry of the Kiena Deep gold system. A fourth underground drill has now been added and a total of 50,000 metres is planned to be drilled underground in this program. To date, a total of 13,127 metres have been drilled.”

One drill continues to follow up on near-mine, auxiliary targets including the VC and S-50 Zones, as they are important components of any potential re-start plan since they are located close to existing mine infrastructure and development. Cross-cut development on the 670 metre level is scheduled to be completed in May 2018 to provide drilling platforms to test the VC1 and VC6 zones.

The Company has completed this year’s drill program on Zone B of the Kiena Deep discovery. Drilling results of this area are detailed in Table 2.

The Kiena Mine Complex is a fully permitted, integrated mining and milling infrastructure which includes a 930 metre production shaft and 2,000 tonne per day capacity mill. From 1981 to 2013 the mine produced 1.75 million ounces of gold from 12.5 million tonnes at a grade of 4.5 g/t. The bulk of this production came from the S-50 Zone between depths of 100 and 1,000 metres. In 2013, operations were suspended due to a combination of declining gold prices and lack of developed reserves. The infrastructure has been well preserved on care and maintenance status. An independent 43-101 report dated December 16, 2015 for the first time assessed the exploration potential and known resources for the entire property. Measured and Indicated resources below a 100 metre crown pillar total 2,500,600 tonnes at 5.59 grams per tonne for 449,000 ounces. Additional inferred resources below a 100 metre crown pillar total 1,563,300 tonnes at a 7.97 grams per tonne for 400,400 ounces.

ABOUT WESDOME
Wesdome Gold Mines has had over 30 years of continuous gold mining operations in Canada.  The Company is 100% Canadian focused with a pipeline of projects in various stages of development.  The Eagle River Complex in Wawa, Ontario is currently producing gold from two mines, the Eagle River Underground Mine and the Mishi Open pit, from a central mill.  Wesdome is actively exploring its brownfields asset, the Kiena Complex in Val d’Or, Quebec.  The Kiena Complex is a fully permitted former mine with a 930 metre shaft and 2,000 tonne per day mill.  The Company has further upside at its Moss Lake gold deposit, located 100 kilometres west of Thunder Bay, Ontario.  The Company has approximately 133.9 million shares issued and outstanding and trades on the Toronto Stock Exchange under the symbol “WDO.” 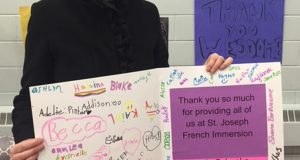