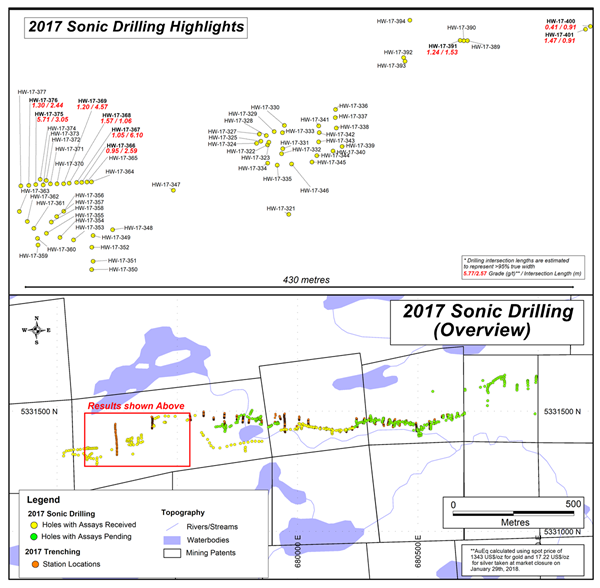 MacDonald Mines Exploration Ltd. announces that it has received gold and silver assays for 100 sonic boreholes at its Wawa-Holdsworth Project. Most of the boreholes were drilled in an exploration target that was defined using geophysical methods, in a previously non-excavated area.  Nine sonic boreholes discovered a new zone of Oxide Sands with evidence of significant gold and silver mineralization.

Highlights from the sonic drilling program:

Quentin Yarie, President and Chief Executive Officer of MacDonald Mines stated, “Our sonic drilling program confirms a larger footprint than previously known for the mineralized Oxide Sands; extending over a strike length exceeding 1.5 km. By “tagging” the bedrock underneath the Oxide Sands we have shown that the mineralization exists in the bedrock beneath the sands.  A current drill program is targeting these zones of mineralization to provide us with better definition for a resource calculation.”

Oxide Sands Sonic Drilling Results
Sonic drilling systematically tested trenches where precious metal-rich Oxide Sands were identified and conceptual exploration areas defined using geophysics. This was done to establish the lateral and strike length continuity of the geological formation from which the Oxide Sands are derived. The newly discovered Oxide Sands zone was traced over a strike length of 50 metres, and may extend further west along a favourable trend revealed by geophysics. Sonic drilling results to date also support the geophysical interpretation that the gold-bearing geological unit(s), of which the Oxide Sands are forming the oxidized cap, extend over 1,500 metres in strike length. Results from approximately 250 sonic boreholes are still pending.

Oxide Sand resource estimation
With results to date, the Company will initiate a NI43-101 inferred resource covering a strategic portion of the Oxide Sands. Further drilling will be required to include the newly discovered zones to the east and west.

The soft and relatively unconsolidated Oxide Sands material can be extracted like an aggregate. The Company’s trenching and sonic drilling programs completed earlier this fall were designed to better define the Oxide Sands in preparation for their potential extraction.

On-site Quality Assurance/Quality Control (“QA/QC”) Measures
Sand samples were transported in security-sealed bags for analyses to Activation Laboratories Ltd. in Ancaster, Ontario. Individual samples are labeled, placed in plastic sample bags and sealed. Groups of samples are then placed into durable rice bags and then shipped. The remaining coarse reject portions of the samples remain in storage if further work or verification is needed.

MacDonald Mines has implemented a quality-control program to comply with best practices in the sampling and analysis of both the Oxide Sands and drill core. As part of its QA/QC program, MacDonald Mines inserts external gold, silver, platinum and palladium standards (low to high grade) and blanks every 20 samples in addition to random standards, blanks, and duplicates.