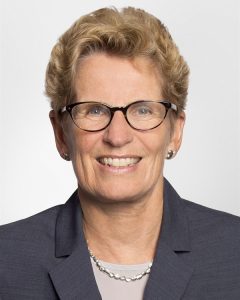 “Today I had the chance to visit Weber Manufacturing Technologies, one of hundreds of Ontario businesses that play an integral role in North America’s automotive supply chain. The auto sector is a critically important part of Ontario’s economy. Today’s visit to Weber’s Midland factory, where 220 highly skilled Ontarians make precision molds and components for auto and aerospace manufacturers throughout Canada, the U.S. and Mexico, only served to underscore that fact.

At Weber, I was also reminded once more that the future of North America’s entire auto sector depends on free trade and open borders. The cars and trucks we build together with our partners in the U.S. and Mexico are on the cutting edge of technology. They are cost competitive with overseas imports. The result of this integrated supply chain is a North American auto sector that builds vehicles for the entire world and creates millions of good jobs for the people of North America. We mustn’t take any of this for granted.

Our continent’s auto sector has been threatened before — by the oil shocks in the 1970s, by overseas imports in the 1980s, by the Great Recession in the 2000s. In the face of each of these threats, we have worked together to deepen our integration and ensure a cost-competitive, growth-oriented industry. Today North America’s auto sector is again under threat. The dangers we now face are the protectionist, anti-trade proposals being put forward by the U.S. Administration.

The U.S. proposal for a 50 percent U.S. content requirement and an 85 percent North American content requirement for autos has been unanimously condemned by industry, workers, economic experts and both the Canadian and Mexican governments. Simply put, the industry cannot tolerate such extreme, punitive measures, divorced as they are from the economic reality of an integrated continental auto sector operating in a fiercely competitive global economy.

In order to protect Ontario auto workers in the face of this uncertainty and defend our role in building an internationally competitive North American auto sector, I have stepped up my engagement with U.S. political leaders. I am defending our interests south of the border, and demonstrating that free trade and an integrated supply chain help create more jobs and growth on both sides of the border.

My work advocating for Ontario will continue over the weekend, when Governor Snyder of Michigan and I will co-host the Conference of Great Lakes and St. Lawrence Governors and Premiers Summit in Windsor and Detroit. The summit will be another great opportunity to strengthen our partnerships at the state and provincial level so that we can defend our workers’ interests in these ongoing trade negotiations. To this end, I will seek to convene another auto sector roundtable. These roundtables are a chance to hear from industry leaders about the latest developments in the NAFTA negotiations and ensure we are bringing their concerns forward at every opportunity.”

Kathleen Wynne
Kathleen O'Day Wynne is the 25th Premier of Ontario. In office since 2013, she is a member of the Legislative Assembly of Ontario, representing the riding of Don Valley West for the Liberal Party.
Latest posts by Kathleen Wynne (see all)
NAFTA Negotiating Objectives 2017-10-16
Kathleen Wynne

Premier Ford and Minister Wilson to Travel to Washington D.C.