Ontario is taking steps to improve the representation of all people living in Ontario’s northernmost communities.

The Far North Electoral Boundaries Commission will review the boundaries of Ontario’s two northernmost ridings (Kenora-Rainy River and Timmins-James Bay) to make recommendations about the creation of at least one and as many as two additional ridings in these areas. Appointed by the lieutenant governor in council, the members of the commission will bring a wide range of electoral expertise, legal experience, and community perspective to the commission’s work.

The commission will conduct public hearings and submit a final report to the Attorney General by Aug. 1, 2017.

Justice Joyce Pelletier is a member of the Deer Clan and comes from the Ojibway community of Fort William First Nation.

Justice Pelletier is a graduate of Lakehead University and received a Bachelor of Laws from Queen’s University. Following her call to the bar, Justice Pelletier practiced law privately for nine years, focusing exclusively on serving First Nations and Aboriginal populations in criminal defence and child protection work. From 1997 and 2005, she served as executive director of the Dilico Ojibway Child and Family Services in Thunder Bay. She has also served as a board member for Legal Aid Ontario and vice-president of the Association of Native Child and Family Services of Ontario.

Justice Pelletier was appointed to the Ontario Court of Justice in 2005 and presides in Thunder Bay.

Greg Essensa has served as Ontario’s chief electoral officer since 2008. Mr. Essensa has over 30 years of municipal, provincial and international elections experience. Before his appointment, he served as the director of elections and registry services for the City of Toronto.

Mr. Essensa’s election administration expertise has been sought out by governments of all levels, as well as associations and not-for-profit organizations. He has advised on municipal elections in British Columbia, Alberta, Quebec and New Brunswick and primary elections in Illinois, North Carolina, Ohio and Texas.

Michael Pal is an assistant professor in the Faculty of Common Law at the University of Ottawa, specializing in election law and constitutional law. He is also the director of the Public Law Group at the faculty and a former board member of the South Asian Legal Aid Clinic of Ontario.

Mr. Pal has a Juris Doctor from the University of Toronto and a Master of Laws from New York University.

Mr. Pal is a fellow at the Mowat Centre for Policy Innovation at the University of Toronto, where he works on issues of democratic representation and election law.

Theresa Hall served as a justice of the peace in Cochrane for over 16 years, and was the first Cree woman to hold this position.

Ms. Hall holds a Bachelor of Arts in Native Studies from Laurentian University. She currently works as a freelance Cree interpreter and teaches Cree language courses at Laurentian University as a part-time professor. She also provides translation services to Attawapiskat Elders assisting provincial court judges. She acts as a facilitator for the Talking Together Circle program run by Nisnawbe-Aski Legal Services Corporation.

From 2011 to 2012, Ms. Hall served as the executive director of Canada Chrome Corporation. Following that, she was the Ring of Fire manager for Mushkegowuk Council.

Ms. Hall is a survivor of the Indian Residential Schools of St. Ann, Fort Albany and Fort George, Quebec.

Eric Fisher served his home community of Wabaseemoong (Whitedog) Independent Nations for 20 years as Chief and as a council member. He is currently the leadership engagement lead at Indigenous and Community Engagement, a consulting firm that focuses on Indigenous community engagement, stakeholder relations, capacity development, and community development. He is fluent in the Ojibway language.

Mr. Fisher has held positions as a crisis intervention worker and was a member on the Mercury Disability Board. From 2013 to 2015, he served as co-chair of the Grand Treaty #3 spring and fall National and Chiefs Assemblies. 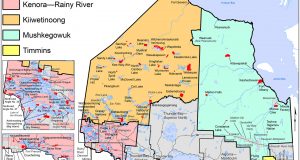