Red Pine Exploration Inc. has completed holes SD-17-73 to SD-17-79, that were drilled immediately south of the Surluga Deposit in the Minto Mine area as part of the new 10,000m spring drilling program. The Company anticipates receiving the initial assay results in the coming weeks.

Quentin Yarie, President and Chief Executive Officer of Red Pine stated, “We are quite excited by the observation of visible gold in all seven holes drilled so far in in the southern continuity of the Minto Mine. These results indicate that high-grade quartz lenses may remain to be discovered along the Minto Mine structure.”

The seven drill holes cover an area 150 m x100 m into the Minto Mine Structure and the deepest intersection is 100 m below surface in SD-17-76. In hole SD-17-73, the Minto Mine structure is overlain by networks of quartz veins, including some containing visible gold and were also observed at 18 m and 44 m. 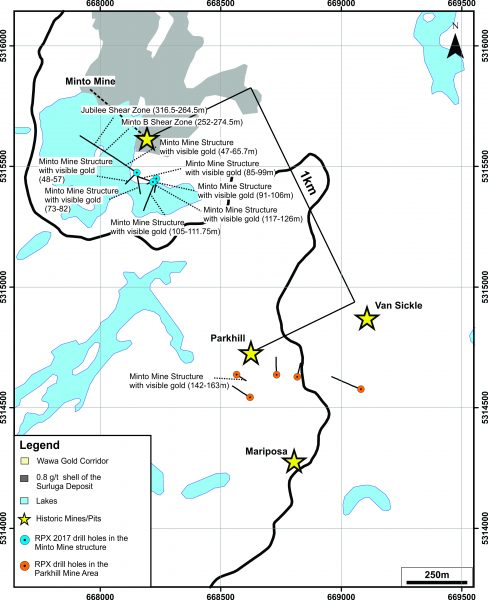 The Wawa Gold property package consists of over 5,000 hectares and hosts several former mines with a combined historic production of 120,000 oz gold. To date, the largest gold deposit on the property is the Surluga deposit, which hosts a NI 43-101 Inferred Resource of 1,088,000 oz gold at an average grade of 1.71 g/t using a 0.5 g/t cut-off contained within 19.82 million tonnes2.