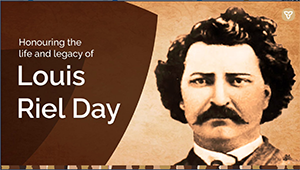 On this date in 1885, Louis Riel was executed for leading the Northwest Resistance in defence of Métis rights. His legacy as a political leader, activist and champion of justice has him credited as a pivotal player in the history of Métis people as well as the formation of the Canadian Confederation. He also fought for minority and language rights, which was foundational for a more inclusive Ontario and Canada.

The Métis Nation of Ontario (MNO) is raising the Métis flag to honour Louis Riel at the 26th Annual MNO Louis Riel Day Commemorative Ceremony at Queen’s Park today. All are welcome and encouraged to attend, as gaining a deeper understanding of the culture and history of Indigenous people in Ontario helps us build reconciliation together.

I encourage all Ontarians to take the opportunity to learn more about Louis Riel’s place in history as a civil rights leader and the many historic and present-day contributions of Métis people to our province.”