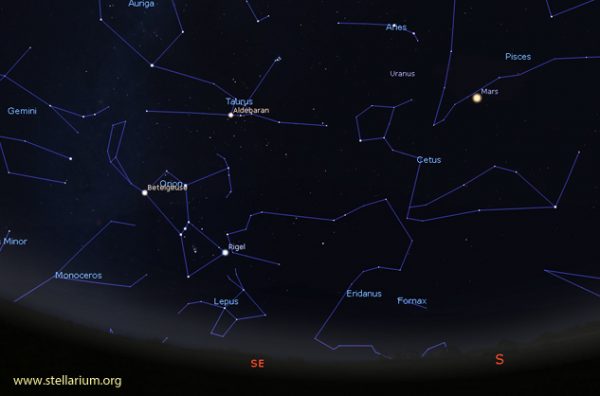 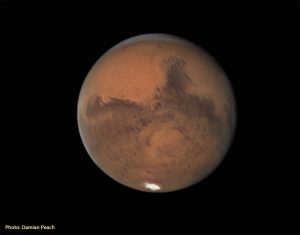 Over the past few months, the planet Mars has been steadily brightening and is now at its peak. While it takes Earth 365 days to orbit once around the sun, Mars lies farther away from the sun taking 687 days to complete one lap. Every 26 months and an odd number of days, Earth catches up with slower Mars, allowing us to see greater detail on its surface through the eyepiece of a telescope. With a separation of 60 million kilometres on October 6 Mars is big and bright.

Dubbed the “red” planet, Mars appears more orange than red and is the result of a large amount of rust otherwise known as iron oxide that covers much of the Martian landscape. It is now rising in the east after sunset and is visible all night long. Jupiter and Saturn are still seen in the western sky and set at midnight. Mercury is also in the west close to the Sun and harder to locate. Before the night ends, brilliant Venus is seen rising in the east around 4 a.m. The days of the week were derived from these five wandering planets along with the Sun and the moon. As the latter months of 2020 tick by, Mars will continue to dim as our distance increases. Our next close encounter occurs in December 2022

Ever since the first successful flyby by NASA’s Mariner 4 in July of 1965, dozens of missions have been sent to Mars to learn its secrets and answer to the ultimate question, is there life on Mars? With the help of orbiters, landers and rovers, more and more discoveries are being made. One of the key ingredient to finding life is water. Every living organism on Earth requires water and scientist believe Mars had oceans some three billion years ago. As the planet continued to cool from its early creation, it lost its magnetic field protecting it from deadly solar radiation. The solar winds blew away the atmosphere and the water evaporated.

There have been more recent discoveries of saltwater locked up in the permafrost. The next mission carrying and rover Perseverance and a small helicopter named Ingenuity is currently on its seven-month journey to reach the planet in February 2021.