There are currently eighteen active fires across the Northeast Region. Sixteen fires are being observed and two fires are under control. The fire hazard ranges from low to moderate in the southern portion of the region with the exception of the Bancroft area, which is showing a high hazard. The central and northern portion of the region are showing a moderate to high hazard, with the Gogama area under an extreme hazard today.

Over the next few days, residents of Northern Ontario may notice a haze and the smell of smoke. This is a result of smoke drift from the Nipigon 45 and Red Lake 49 forest fires. 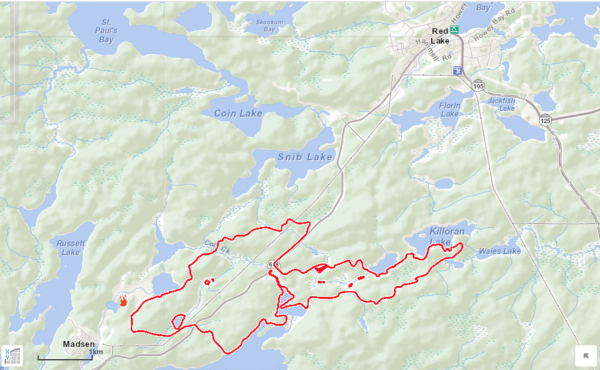 Red Lake 49 is approximately 750 hectares, and is burning three kilometres south of the Red Lake community and three kilometres west of Hwy. 105, good progress has been reported in slowing the spread of the fire towards the community. 15 four-person FireRanger crews are fighting the fire, and heavy machinery is engaged in building fireguards. Aerial support is from 8 helicopters bucketing water onto the fire’s edges. and an air attack package, consisting of two CL-415 water bombers and a bird dog escort aircraft, is available as required.

Nipigon 45 is 38 kilometres west/southwest of Eabametoong First Nation (Fort Hope). The smoke from Nipigon 45 is causing air quality concerns for the remote community, situated on the Albany River. Nipigon 45 is 3,603 hectares in size and not under control. Community leaders in Eabametoong have decided to evacuate vulnerable members of the community as a first stage and are considering further options. 7 FireRanger crews are currently committed to Nipigon 45, and a Type 2 Incident Management Team has been assigned to the fire.

Premier Doug Ford will be joined by Kinga Surma, Associate Minister of Transportation (GTA), and Monte McNaughton, Minister of Labour, Training and Skills Development, to make an announcement at 3 p.m. today.

Did you know? Animal Crossings players, for each spoiled turnip donated on Hellmann’s island, Hellmann’s will donate a meal to Second Harvest. Each week, Animal Crossing players purchase turnips on the ‘Stalk Market’ that will spoil if not sold within the week, becoming virtually worthless in the game. From 3 PM EST on Monday, August 17 to 12.15 AM EST Saturday, August 22, players will be able to visit the Hellmann’s Island to drop off their spoiled turnips and explore the other beautiful attractions on the island. In exchange for these spoiled turnips, Hellmann’s will donate to Second Harvest, Canada’s largest food rescue charity, to help provide 25,000 meals in total for vulnerable communities across the country.