This year the Ministry will install a permanent retrofit over the winter that will allow the bridge to continue to function safely and reliably.

Accessible formats and communication supports are available, upon request.

Required work was completed ‎early this morning, therefore the additional two hour closure planned for Sunday, February 21 from 4:00 to 6:00 am  will not be required.  Additional short-term closures of 15 minutes or less may still occur throughout the weekend while necessary bridge repairs are undertaken in order to open the bridge to two lanes of traffic by the end of the month. We apologize for the inconvenience.  Motorists are reminded to obey and follow all traffic signage for the safety of both workers and drivers.

Today (February 16, 2016) in the legislature, NDP Transportation critic Wayne Gates (MPP Niagara Falls), demanded to know how a $106 million bridge providing a crucial connection between eastern and western Canada failed to survive a single winter.
“How is it possible for the government to spend $106 million without making sure that this bridge could withstand an Ontario winter?” asked Gates.
The $106 million Nipigon River Bridge opened to traffic less than three months ago. Following the arrival of winter two months later, the bridge buckled and failed.
“Who is responsible for signing off on a bridge that failed upon its first encounter with an Ontario winter?” asked Gates.
The Minister of Transportation would not explain how the government built a $106 million bridge that failed to survive a single Ontario winter.

Statement by the Minister of Transportation on Nipigon River Bridge

“I am pleased to provide an update on the Nipigon River Bridge situation.

Earlier today, Minister of Northern Development and Mines Michael Gravelle and I spoke with municipal and First Nations representatives from across the region to provide them with a progress update on both the work to find a cause for the recent bridge issue and our progress in re-opening both lanes of the bridge to traffic.

Two respected research and testing facilities have been selected to conduct testing of the bolts from the bridge: Surface Science Western and the Faculty of Engineering at Western University and the National Research Council of Canada.

This week, the labs will be completing an independent, visual ‎examination of the bolts. Once that examination is complete, the two labs will be in a better position to determine how long the full testing will take. Full testing will include a chemical analysis of the bolts, a determination of the nature of the failure, a confirmation of the mechanical properties of the bolts as well as a comparison of the bolts to design specifications. We have expressed to both research labs that this testing is a top priority for our government, however, it is important that we get it right, and that will take some time.

This testing will help the ministry determine the cause of the issue and develop a permanent solution.

The ministry continues to work with the Ontario Professional Engineers who performed the design of the bridge at WSP (formerly McCormick Rankin Corp in Mississauga), and the Canadian firm that provided additional cable stayed bridge expertise, Buckland Taylor in British Columbia. The design was performed in accordance with the Canadian Highway Bridge Design Code and is capable of withstanding the necessary Code design parameters for winds in excess of 100 km/h and climatic conditions including freezing temperatures well below -40 degrees celsius. The tensioning of the cables has been confirmed however, the ministry has not yet ruled out any factors in its investigation of the cause. All of this work, combined with the results from the Western University and NRC analysis, will help the ministry determine the cause of the issue and allow our engineers to begin the development of a permanent solution.‎ Together with the contractor, a joint venture with Bot Construction Canada and Ferrovial Agroman Canada Inc., and their suppliers from within North America, significant efforts will continue to provide a safe and reliable solution that will open the bridge to two lanes.

The ministry is also currently reviewing a number of repair options to open the Nipigon River Bridge to two lanes of traffic. Each option proposes a different connection method and location to connect the bridge deck to the foundation. The chosen solution will also be peer reviewed by Ontario and other Canadian engineers.

To complete the work, occasional lane closures and temporary short-term full closures of the bridge during off-peak hours will be necessary. Notice of the complete closures will be provided well in advance to the neighbouring communities and travelers through our website and 511, MTO’s Road Information Line. Our goal is to re-open the bridge to two lanes by the end of February.

Work on the demolition of the old bridge remains paused as we focus on fully reopening the bridge to traffic and implementing a permanent solution.

Again, please be assured that I take my responsibilities for road safety seriously. That is why the design of the Nipigon River Bridge was completed by professional engineers licensed in Ontario. The design is in compliance with the Canadian Highway Bridge Design Code which considers regional climate conditions.

I would like to thank everyone for their continued patience. MTO will continue to provide regular updates to the public as information becomes available. I would also like to thank Michael Gravelle for his leadership on behalf of the local community. For the latest information on highway closures, the public can call 511 or check Ontario.ca/511.”

The Ontario Ministry of Transportation (MTO) has reached out to the National Research Council (NRC), Canada’s “go-to” research and technology organization, to help in their efforts to determine the cause of the failure of the Nipigon River Bridge, an essential connection of the Trans-Canada highway in northwestern Ontario and Ontario’s only cable-stayed bridge.   Beginning next week, NRC’s experts in materials analysis and critical infrastructure will analyze some of the damaged bolts taken from the Nipigon River Bridge, which will be transported to facilities in Ottawa for further testing. Failure analysis will be carried out on the bolts used to hold together two sections of the cable-stay bridge.   Work will begin with fracture surface evaluation, metallurgical composition, and mechanical property verifications to ensure conformity with ASTM standards.

“We are pleased to work with Ontario’s Ministry of Transportation to analyze the conditions that led to the bolts’ failure on the Nipigon River Bridge. The National Research Council is deploying its best industry-leading experts in materials analysis and critical infrastructure and advanced equipment to arrive at a timely, safe, and lasting solution for Canadians using this important trade corridor.” –  Richard Tremblay, General Manager of Construction at the National Research Council of Canada

From Ontario511 Tweet at 4:10 p.m.: Nipigon River Bridge, on Highway 11/17 has one lane open for cars and trucks with gross vehicle weight up to 63,500 kg only. The bridge is also restricted to a maximum horizontal clearance of 4.0 metres. Information on allowable weights and dimensions will be updated once available.

Jan 11, 2016 @ 09:53 – Many are still expressing their concern as motorists travel over the newly opened Nipigon River Bridge. Traffic is being conducted in alternating flows of traffic – the bridge is only one lane open. Traffic including transports is crossing at 25km/h.

Engineers and crews worked all night, and the photograph to the right displays that a number of concrete weights have been added to weigh down the bridge after it lifted.

Ashley Littlefield of Dorion, ON watched it happen. she stated that “if you put a piece of paper on the table and blow hard under one corner, is exactly how it happened. It just lifted, didn’t hear anything.” She estimated that the bridge rose 2-3 feet as shown in her photo below. 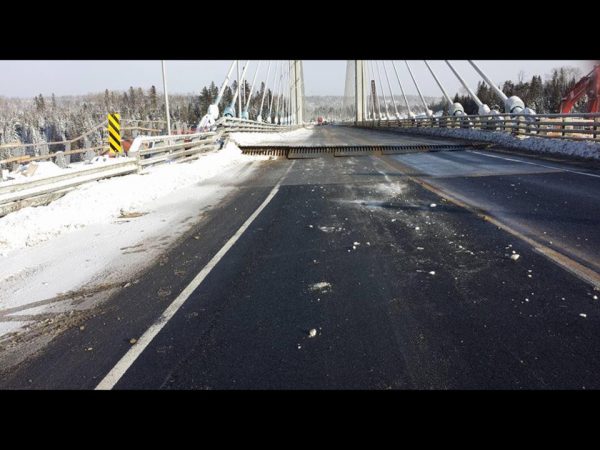 At 8:45ish the Facebook page (Northern Ontario Traffic Alerts – Alertes Routiers) posts that one lane is open at the Nipigon River Bridge. “FIRST SET OF TRAFFIC IS CROSSING AS WE SPEAK. Transports as well”. 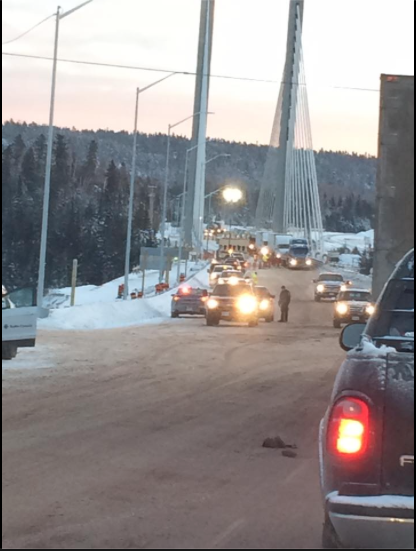 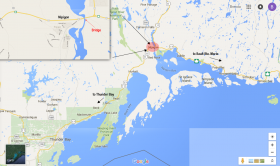 Not clear at this time when the bridge will re-open. Engineers are currently assessing the situation. Marathon will go over emergency management plans this morning. CFNO (Marathon) notes that lignups have been seen for gas; consumers are concerned because gas is sourced from the west. It is anticipated that grocery stores will also have product supply problems. The Nipigon Community Centre (west side of bridge), and Lake Helen Resource Centre (east side of the bridge) is also open for shelter for stranded motorists. Nipigon Baptist Church is holding breakfast at 10 am for stranded motorists. Travellers without passports and necessary documents (if they are transport drivers) are stranded. In Wawa, this will pose problems for employees at local area gold mines who travel from west of Nipigon.

CBC Video for readers in the United States who cannot see.   https://www.youtube.com/watch?v=K6Xi_aiMmns

As of January 10, 2016 7:08 p.m., the community of Lake Helen Reserve has declared a State of Emergency due to the uncertainty of the re-opening of the Nipigon River Bridge.

The Nipigon Baptist Church will be opening its doors tomorrow at 10am for a free breakfast for those stranded by the Nipigon River Bridge closure.

Deputy-Mayor Eric Pietsch has declared a State of Emergency for the Municipality of Greenstone due to the closure of Highway 11-17, and structural issues with the Nipigon River Bridge. Closure is indefinite at this time.

Nipigon OPP Press Release: On January 10, 2016 at approximately 3:15 PM police received a report that the Nipigon River Bridge on Highway 11-17 had lifted, blocking traffic.  Police arrived on scene and noted the west side of the bridge had lifted approximately 60 centimetres.  No injuries or vehicle damage occurred as a result of this incident. The bridge is currently closed to vehicle traffic.  The Ministry of Transportation and BOT Construction remain on scene conducting repairs to the bridge. At this time there is no local alternate traffic route available.  The bridge remains open to pedestrian traffic.

MTO Press Release: The Ministry of Transportation advises the motoring public that Highway 11/17 is closed at the Nipigon River Bridge. Safety is our top priority. Conditions are currently being assessed and additional details on estimated time for opening of the highway will be provided when they become available. For the latest information on highway closures, the public can call 511, MTO’s Road Information Line or check www.ontario.ca/511.

Wawa-news article about history of bridges over Nipigon River, and construction history of new bridge, and implications on travel through Northern Ontario.

Reposting of original article to correct first headline saying that Hwy 11 was still a way to go west.

Jan 10, 2016 @ 15:35 – OPP Press release received at Wawa-news, first article posted: At 3:35 p.m. today, the Nipigon Detachment of the Ontario Provincial Police advised that the bridge on Highway 17 has been closed for an indefinite time due to mechanical issues.