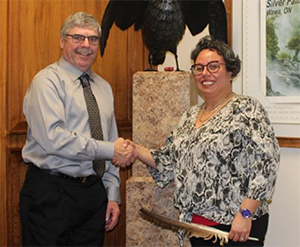 At the Special Meeting of Council held on Tuesday, January 25, 2022, Melanie Pilon was appointed to the vacant council position. The position became vacant after Pat Tait became the Mayor in December 2021.

Five residents put their names forward for consideration for the position and each candidate provided an overview of their backgrounds and reasons for running for Council at the Special Meeting. After three rounds of voting, the majority of Council selected Melanie Pilon. “This was a very difficult decision given the great field of candidates,” said Mayor Pat Tait. “Each candidate is to be thanked and congratulated for putting their name forward.”

“As a long-time resident of Wawa with an interest in municipal politics, I believe that I have a background that will positively contribute to Municipal Council and the community”, said Melanie Pilon. “I am grateful to Council for appointing me to the position and as the first Indigenous woman to participate on Council, I hope to inspire and encourage other women and Indigenous persons to run for leadership positions.”

Melanie is a Graduate of Laurentian University, Bachelor of Business Administration (Hons) program and is currently employed as a Senior Consultant – Indigenous Relations for Bell Canada. On February 1, 2022, Melanie officially took her seat on Council with the full support of her family and friends. Chief Pat Tangie congratulated Melanie after the inauguration ceremony, recognizing her Indigenous heritage and strong leadership abilities.

This term of Council will remain in office until November 14, 2022, when a new Council will be put in place after the municipal election is held on Monday, October 24, 2022.