Age, maturity and experience eventually bring the realization that some things in this life simply aren’t just or fair.  But that doesn’t mean surrendering to injustice without speaking out and pushing back.  Such is the case with the destruction of Northern Ontario’s rail passenger service.

For more than half-a-century, successive federal governments have committed transportation vandalism across Northern Ontario.  By steadily stripping away the network of interconnected rail services once operated by CN, CP, and VIA Rail Canada, it has left Northern Ontario a disconnected region poorly served by the heavily subsidized and environmentally repellant highways and air services that supposedly make passenger trains redundant … but don’t.

In 1983, I wrote a CBC television documentary based on a five-part Morningside radio series I did earlier that year for Peter Gzowski, the great-grandson of one of Canada’s legendary railway builders of the 19th century.  Both projects were fuelled by my own sense of transportation injustice and a need to set the facts before the public, which CBC allowed me to do.

The opening I wrote for the TV documentary is as relevant today as it was 38 years ago.

“Canadian trains.  Thirty years ago, Canadians could go just about anywhere in the country by train – from Corner Brook, Newfoundland, to Cranbrook, B.C.  But in the last 30 years,n Canadian passenger service has almost become extinct.  Nine hundred and thirty-six trains have been dumped and 6,303 towns and villages have lost their passenger rail service.  No one ever announced passenger trains are out, but that’s what has happened.

“Canadians took eight million train trips last year.  Most of the trains are old.  Even the new ones are slow.  Canadian passenger trains are deteriorating at a time when the Japanese, the French, and even the Americans are running fast, modern trains – on time.

“The railway’s problem really began in the 1950s as the car and then the plane became the first choice for travellers. The government was quick to react. In the past 30 years, tax money for passenger rail service was $3 billion. For airports and their services: $10 billion. And for roads: $45 billion. It was no contest and the end was inevitable. CN and CP wanted out of the passenger business and that left government with only two choices: get rid of it or run it themselves.

“They decided to let it die … quietly.  Problem:  passengers wouldn’t go away.  So in 1976, a last ditch decision was made.  VIA – a Crown corporation to run a railroad.”

The destruction of Canada’s rail passenger service is an injustice and its name is VIA.  It has been made worse by governments since I wrote those words.  How much worse?  This much: 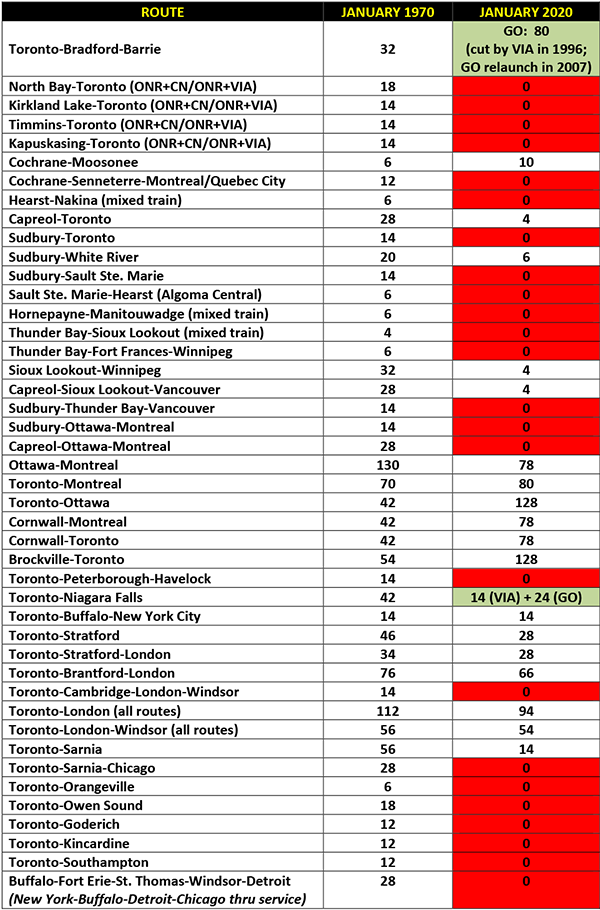 © 2021 by Greg Gormick and On Track Strategies

That this situation has worsened in the intervening years and is getting worse today is even more unfair.  When questioned about it, the politicians and their publicly-paid paladins have no end of excuses, which just echo the feeble fibs we received in the distant past.  They often focus on how allegedly expensive it would be to provide a modern version of the former northern rail service.  My favourite excuse is their need to act as thrifty guardians of the public’s finances.

One wonders how fiscally, intellectually, and morally trustworthy these self-appointed federal watchdogs are when they’ve let Ontario’s rail passenger system disintegrate and injure Northern Ontario’s economy, social patterns and environment, as well as those of many other regions.

In 1985, the Mulroney government’s own Rail Passenger Action Force made the case for the complete modernization of VIA.  They demonstrated how the investment in new equipment to be used on a system that included five routes serving Northern Ontario would be repaid through the long-term cost savings and the additional ridership it would attract.

In a May 23, 1985, report to Conservative Transport Minister Don Mazankowski, they said: “Acquiring the recommended numbers of new, proven long-distance locomotives (48) and bi-level cars (214) will be essential if VIA is to remain a national rail passenger system; the only alternative would be to close down the system outside of the Quebec-Windsor Corridor….

“We remain convinced that, whatever the budget finally provided to VIA, the only way to stop the drain of government funds to VIA is to modernize the corporation; in fact, the only alternative is to shut it down completely.”

The group’s reward for its pro-rail solution was to be shut down, their reports sealed and their advice shunted aside.  Regional access, mobility, and equity be damned.

The disruption caused by the pandemic and its own constant bleating for environmentally sound solutions presented the Trudeau government with an opportunity to revisit the folly of destroying a form of transportation that is green, clean, and wanted by a majority of Canadians.  Instead, we got $8 billion in bailouts for the aviation industry and hilariously gut-splitting statements from Liberal Prime Minister Justin Trudeau about how air service is the backbone of Canada’s regional transportation system.

I’d like to test his claim out with the residents of Chapleau, Longlac, Nakina and dozens of other northern communities strung out along the railway lines, but lacking air facilities or services.

And so this chronic case of federally-instigated transportation injustice rolls on.  Dare I say it is now even worse in Northern Ontario thanks to another pack of political opportunists? 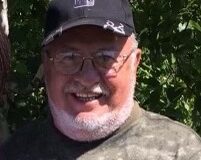