The fire hazard ranges from high to extreme in the central portion of the Northeast region, while areas in southern and northern sections of the region are seeing a low to moderate hazard today. 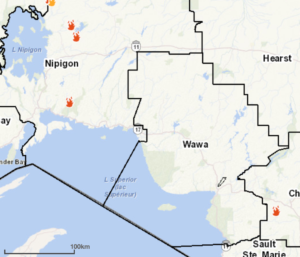 Northwest Forest Fire Region – There were eight new fires confirmed in the northwest region by the late afternoon of July 12. At the time of this update there were 68 active fires in the region. 19 fires are not under control, four fires are being held, 28 are being observed and 17 fires are under control.

The wildland fire hazard is mainly high to extreme across the region. There is an area of moderate hazard in the far north of Sioux Lookout and Nipigon districts. 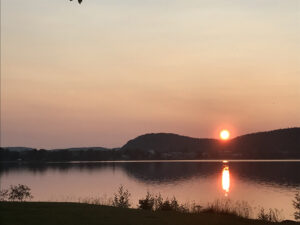 At last night’s Soo Municipal Council approved the rezoning, and Sault Area Hospital’s planned Residential Withdrawal Management & Safe Beds facility has found a new home. The former Sault Star building has been rezoned from industrial to institutional  with special provisions to continue to allow for the warehousing and distribution to continue on part of the 5 acre property.

More than 160 “undocumented and unmarked” graves have been confirmed on Penelakut Island, formerly Kuper Island, according to a statement from Penelakut Tribe Chief Joan Brown yesterday.

Steve Clark, Minister of Municipal Affairs and Housing, will be joined by Michael Tibollo, MPP for Vaughan – Woodbridge, as well as members of the Toronto and Region Conservation Authority and Greenbelt Foundation to make an announcement at 9 a.m.

Monte McNaughton, Minister of Labour, Training and Skills Development, will be joined by Drew Dilkens, Mayor or Windsor, to make an announcement about training supports for laid-off and unemployed workers in Ontario at 9:30 a.m.

Dr. Merrilee Fullerton, Minister of Children, Community and Social Services, to make an announcement at 10 a.m.