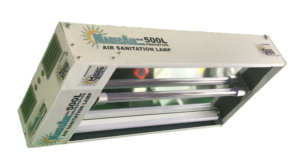 Al Errington (Errington’s Wilderness Island Resort) was trying to find a solution to reduce the risks of COVID-19 transmission in the tourism industry when his research led him to references to Far-UVC. 10 years ago, scientists discovered that Far-UVC inactivates viruses and bacteria without harming people, animals or plants. Far-UVC is ultraviolet light in the low end of the ultraviolet light spectrum from 207-222nm illustrated in the graphic below. Natural Far-UVC from the sun is blocked by the earth’s ozone layer.

The reason Far-UVC is safe for people but “kills” viruses and bacteria is physics, Far-UVC is easily blocked by virtually any organic or inorganic material of any substance. Viruses & bacteria sheath (essentially skin for want of a better word) is as close to non-existent as physically possible. Far-UVC can inactivate viruses and bacteria in the air but cannot inactivate viruses or bacteria if they enter a person’s body, even if it is just in their surface skin. This ‘light’ is not only very effective against COVID-19 but as well as other viruses and bacteria that are airborne like the “common” cold, flu, chickenpox, mumps, measles, whooping cough, tuberculosis, legionnaires disease.

That began the wheels turning…

Al continued his research and found that Anthony Baldasaro (CEO and co-founder of Magec Tech™) and Apoorva Yadav were also working on developing Far-UVC for medical devices for a few years. The question was, “Is it possible to develop Far-UVC for airborne viruses”. That important question led to Al joining the Magec Tech™ team in developing what they now call Magec Air™. These devices look like fluorescent light and ballast can inactivate viruses and bacteria that are airborne in areas up to 50 square metres/500 square feet while people are present. Magec is an ancient name for the sun from a lost culture off the coast of Africa. Anthony explains that “Far-UVC inactivates viruses and bacteria that are airborne while people and animals are present effectively reducing person to person transfer and infection as well as animal to person and animal to animal.”

It is certain that this form of sanitation will not replace masks, physical distancing or vaccines during the current COVID pandemic or any epidemic. However, the group believes that Far-UVC can substantially enhance the efficacy of traditional measures of combating contagions by actively inactivating viruses and bacteria that are airborne while people are present in public and workspaces thus reducing the scope and duration of the human, economic and societal costs of COVID.

The media release explains, “Optimizing Far-UVC into an effective, cost-efficient technology has been challenging. Government support has been difficult to access because Far-UVC technology is not medical, it is physics. We have however persevered and are now ready to release our technology against COVID and the ancient problems of airborne viruses and bacteria. We are especially interested in patent licensing agreements with lamp and light manufacturers with current capacity that supports substantial and expedited manufacturing for distribution as soon as possible. To support accelerated manufacturing and distribution Magec Tech™ has started a GoFundMe campaign linked on their website MagecAir.com.”