News from the Park – Time is Up

I remember a favourite primary school teacher who, when I think back, really knew how to get her students to quickly switch gears and engage their minds on a particular focus.  It was nothing terribly special really, but she would tell us to reach into out desks, pull out our thinking caps and be sure to tie them on securely below our chins just in case our minds suddenly might burst with ideas.  She really brought the point home by demonstrating and talking us through how to fit it on squarely and tie an imaginary secure knot.  Laugh if you want to, but it works with grade twos and threes.

So now for a moment, pretend I’m Miss Nadeau asking you to put on your thinking cap and tie it securely under your chin —  not too tight though as we don’t want to cut off your circulation. 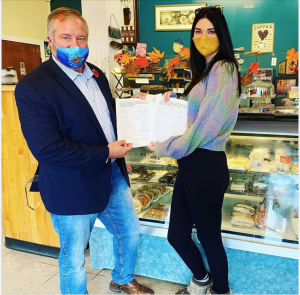 I meet plenty of great people travelling across #AlgomaManitoulin but then there’s that special person you meet who just gives you #goosebumps and tadah you have Kennedy Helena … she took on the #WinterRoadMaintenance of Hwy 614 concerns of the community and took action by collecting over 1400 signatures (and counting). I’m so impressed and proud of Helena and community for taking this action. As MPP it’s a privilege and honour to take my seat at the Legislature on your behalf … thank you Helena a very wise man once said #dontletthemtellyouitcantbedone and that was Jack Layton he inspired me just like you’ve inspired me #idowhatidobecauseofpeoplelikeYOU

Now, over the next two minutes I want you to think hard and make a list of the 5 most important resources to ensure Canada remains a prosperous and free nation.  Use a pad and paper if you wish, but don’t cheat by reading ahead.  For added motivation, ask someone to hum “Think,” – you know — the Final Jeopardy theme song in the background.  Do it twice for good measure.

Okay, time is up.

Well, of course the list of possible answers will be as long as your arm, but I bet you that one of the most common responses will be “our children.”

Nelson Mandela said, “Our children are the rock on which our future will be built, our greatest asset as a nation.  They will be the leaders of our country, the creators of our national wealth, those who care for and protect our people.”  He’s right, for without our children, we have no future.

Now for the scary part.  Author Pam Leo says, “Children are mirrors.  They reflect back to us all we say and do.”  I say scary because just look at what we have done – or rather have not done – for the children of Neskantaga.  And let’s be very clear, also, that Neskantaga is only one example of this.  Unfortunately there are many more in Ontario and across Canada where water supply is not adequate to meet demands, reliably supplied, safe to drink and in some cases not even safe to bathe in.

For 25 years – an entire generation – the people of Neskantaga have been without clean water, living under a boil water advisory. Not 25 days.  Not 25 months.  25 years!  Then, just recently, dangerous hydrocarbons were found in the local water reservoir.  Neskantaga went from having no clean water, to having no water at all – while also contending with the COVID-19 pandemic.  The entire community has been forced to evacuate for weeks now with no end in sight.

Imagine now that it is your own children, not someone else’s, who are living this experience.  Imagine that you are the parent.  How would you explain how our leaders could let this happen while at the same time trying to teach them to love and care for others?

I know many readers will have seen or heard the recent segment on the CBC news in which they showed little children of Neskantaga holding up signs begging for someone to show some compassion by fixing the longest boil water advisory in Canadian history.  One sign read, “Fix our water…We’re not animals.  We’re not things.  We’re just like you…”  These are children who just want to go home to live safe, health happy lives, just like all children in Ontario do.

Members of Neskantaga First Nation held a sit-in at Queen’s Park to ask Doug Ford to stop ignoring the pleas of the people.  In the name of humanity, the Conservative government must step up and fix this problem.  Sol Mamakwa, MPP for Kiiwetinoong and the NDP Indigenous Relations and Reconciliation critic says that “Every Ontarian knows Doug Ford would never neglect and dismiss a community like Etobicoke North this way.  Every day that Doug Ford does nothing to fix this crisis is another day he makes the shameful choice to put the health and lives of Neskantaga’s community members at risk.”

Mamakwa went on to point out that not only has the Province ignored their pleas but has also slashed 80 per cent of the budget for Ontario’s Indigenous Drinking Water Program; totally walking away from any potential efforts to invest in infrastructure for clean drinking water in Neskantaga and other First Nations that need it.

This is outright abuse.  Remember, “Children are mirrors.  They reflect back to us all we say and do.”

Look around at how the world’s historic lens is refocusing on what our founding fathers and societal leaders have done.  Some much celebrated historic icons and national heroes are now seen as symbols of inhumanity and shameful values – their statues and memorial’s torn down.  Nelson Mandela was right when he said, “History will judge us by the difference we make in the everyday lives of Children.”

Above all else, clean potable water is a basic human right.  People can live for about three weeks without food, but only three or four days without water. So how can successive federal and provincial governments dismiss this most important source of life to an entire generation as they have Neskantaga residents and other communities?

I have often said of Algoma-Manitoulin that people are our greatest resource – and the most precious of these are our children.  And if we don’t get this right, not only am I worried about the health, safety and happiness of our children, but also I’m worried for ourselves – the adults of today and the aged of tomorrow.  I’m worried because children are not always very good at listening to what their elders say, but they never fail to imitate us.

Again, the wise words of Mandela, “They will be the leaders of our country, the creators of our national wealth, those who care for and protect our people.”