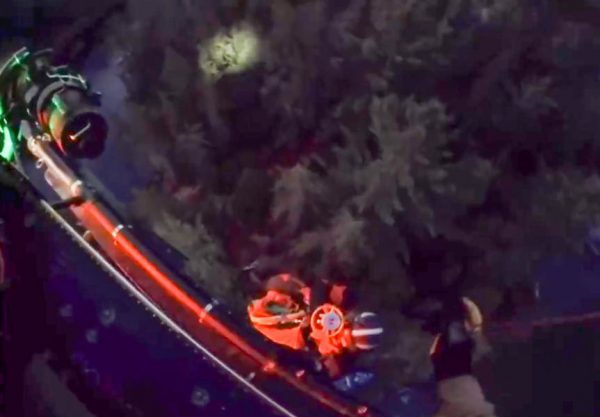 This morning, @OPP_NER requested assistance for a boater stranded at the bottom of rapids on Thistle Lake, Ont, 424 Sqn responded with a @RCAF_ARC Griffon helicopter, #SAR Tech proceeded to a successful evacuation and transported the patient safely to hospital. (Twitter)

On August 12, 2020 at 9:30 p.m., members of the Nipissing West Detachment of the Ontario Provincial Police (OPP) responded to a report of an overdue fisherman on Thistle Lake, in the Municipality of West Nipissing (Field).

The 90-year-old male, from Waterloo, left his rental cottage at 11:30 a.m. to go fishing and was reported missing after he failed to return.

The OPP Marine Unit and the OPP Aviation Services-Helicopter Section were deployed to assist. At approximately 12:30 a.m., the OPP Aviation Services located the fisherman in his boat (wearing his personal flotation device), at the bottom of the rapids while waving at the helicopter for help. Due to the extreme rough terrain and remote location, neither the OPP Marine Unit nor the OPP helicopter were able to get close enough to the boater. Therefore, the assistance of the Joint Rescue Coordination Centre (JRCC) was requested. At approximately 5:35 a.m., JRCC located and rescued the subject who was in good health but was transported to hospital as a precaution.

Investigation revealed, the man was fishing near the rapids when the boat engine shut off and he was unable to re-start it. At this time, his boat had drifted and it went down an eight foot drop to the bottom of the rapids. He attempted to paddle-up closer to the rapids with no success, at which point he decided to stay put and wait for assistance.