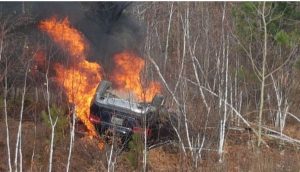 On October 30, 2019 at 2:50 p.m., officers from the Nipissing West (Sudbury) Detachment of the Ontario Provincial Police (OPP) responded to a single vehicle rollover collision on the northbound on-ramp to Estaire Road from Highway 69, City of Greater Sudbury.

Officers arrived on-scene within minutes to find the vehicle fully engulfed in flames with the lone occupant still inside. The three officers grabbed the fire extinguishers from the trunk of their cruisers and were able to subdue the flames enough to pull the driver from the burning vehicle.

Preliminary investigation revealed the driver failed to negotiate the ramp, struck the guard rail and rolled-over.

The driver was taken to hospital by Emergency Medical Services (EMS) with non-life threatening injuries. Sudbury Fire Department attended the scene to extinguish the fire.

The three OPP officers were treated for smoke inhalation and released.

The 74-year-old male driver, from Sudbury, was charged with Careless Driving, contrary to section 130 of the Highway Traffic Act.