“For the last few years, we have worked diligently with elected officials in Toronto and Ottawa and a dedicated team of local leaders to develop a long-term strategy to sustain HCRY,” said Louis Gravel, GWCI President. “While both the provincial and federal governments made commitments to support our long-term plan, the only recent funding received has been a modest investment from the province to temporally sustain operations. This funding allowed us to complete the minimum level of emergency repairs needed to sustain the safe operation of the line while we pursued the longer-term solution.

The team’s work to secure sufficient capital investment from the government is in recognition that this transportation corridor is critical to the region’s industries and future development of Northern Ontario, and our plan includes a cost-sharing model between HCRY and both levels of government. The current state of the railway requires approximately $40 million in capital investment over a five-year period to rehabilitate the line and sustain its safe operation. Since freight volumes do not provide an economic rationale for GWCI to make this investment, we have made the difficult decision to cease service on the line in early 2020.

Until then, we will continue to work with the governments of Ontario and Canada, should they be prepared to fulfill their commitments to preserve this vital regional strategic asset. While they recently announced substantial investments to help some of HCRY’s main customers, the railway that supports their supply chains and access to global markets hangs in the balance.

We have never been in the business of closing railways and do not take this decision lightly, as we recognize how important HCRY is to our valued employees and the communities and businesses served since we began operating the line in 1997. The need for this capital investment predates that time, but we remain hopeful that it can still be secured prior to our cessation of service.” 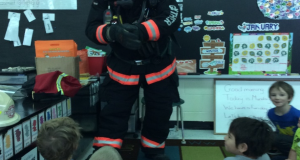 There was a FIRE TRUCK at Sir James Dunn!